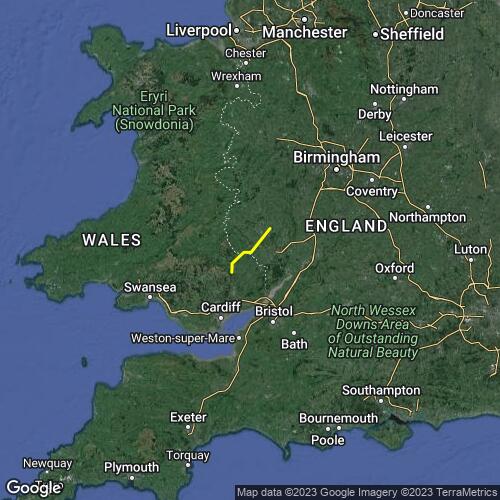 I had an interesting flight at Blorenge at the BCC on Sunday (18/07/2021) - looks like the longest one of the competition, so I am very chuffed, but I did fly the wrong way.

Blorenge overlooks Abergevenny & takes N, NE to E. The hill is owned by the SEW club and it is a beautiful site. There wasn't much wind but the day was thermic and so hot I didn't wear a jacket, which is a first.

The locals advice was to push out right over town to get a climb. It wasn't good advice. Most people tried that but none got away that route. There is a landing field in the middle of town, but its a long drive up & you would not want to walk it. The comp had started about 12.30 but I waited until 2.20, although nothing changed.

I opted to try and soar just to the east of takeoff where there is a steep bowl facing NE. I got close to the ferns but managed to find some gusts that kept me up long enough to connect to a thermal which quickly got me quite high above TO. As usual I was on my own for the whole day. I stayed in that climb to 4000' which wasn't quite the top. And that was my highest point so I never reached cloudbase all day. The normal direction to take then would have been downwind, so SW, or west down the valley to Crickhowell. But there wasn't much wind and I liked to look of Sugarloaf, which is directly north of Blorenge. I didn't lose too much heigh on the valley crossing and as hoped picked up another thermal going up Sugarloaf.

I wasn't sure where to go then. I could see Pandy & remembered the area behind (west) of it as remote & a long walk out so I headed to Pandy in case that ridge was working in what I thought was a NE-ENE wind. When I got there there were no wings on the ridge suggesting it was not on. I got a small climb over Pandy village and by now the wind seemed to be coming from the S so I headed NE up the Monnow river valley which marks the England-Wales border by (A465)

Not far up there I was getting low, 800' all so started eying up suitable landing fields. Some were in crop, some were harvested & one was being harvested, which can kick a thermal off. I hovered over that. Indeed with a little patience I got a nice smooth climb and I was focused on the climb & not watching my FlySkyHy.

Suddenly at 3500' I got an airspace warning. Honestly I hadn't done best preparation and was not expecting to be where I was, but I didn't think there was any airspace about. But poor Paul Hawkins had his winning 55km flight the day before disallowed for an airspace infringement so I was on alert. I turned away and checked FSH carefully. It was a round 2.5nm 0-10,000' class Q danger area for Pontrilas Army Training Area. It wasn't so easy to avoid as I was still in lift and drifting toward it. Luckily without much wind and using bar I pushed away. But lost the climb.

No matter, I pushed on and the air was luckily quite floaty between 1500 & 2500. The wind had clearly switched and was now behind me as I floated NE. The next problem was that after 2 hours of flying my phone was out of juice. It sits in a battery case which was charged but it decided to fail me and the case would not deliver power to the phone. I tried a lot of times. Eventually I gave up but didn't want to lose the flight track, or my ability to communicate for retrieve. So I turned my screen off and aimed to glide up the A465 until I landed. I got under 600' near Winnal & could see a service station and a safe landing. But where the road crosses the railway there was a big plant nursery. Lots of concrete & black plastic which I flew right over and of course it was kicking off & I couldn't resist it. It was a sweet climb but I only took it to 2400 as I was not pushing.

Next surprise was a huge town. This was Hereford. It looked too big to cross directly. Without instruments I nearly went north of it which might have put me in another danger area (SAS HQ? ) but luckily I went south and found a floaty line right over parts of the town. With battery power I would have topped up height & pushed on but I was ready to land so ignored a couple of thermals and glided to a village that looked like it would have a pub. Easy landing on grassy field and a 20 minute 28C hike and I made it to the Crosskeys pub, Wirthington. I had 2% battery & managed to message Ali & Dale with a location. Thankfully I had left my car keys one the car & Dale & Ali drove up and joined me for a well deserved pint.