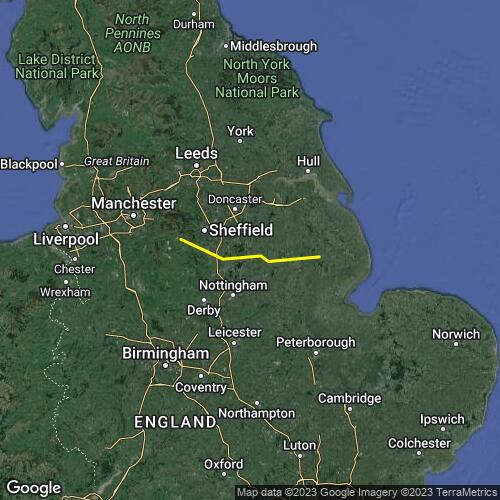 Not my furthest flight but my longest. For once I was at the hill early enough to leave with a gaggle and so found myself flying with gaggles - all my other long flights have been solo - what a difference it makes hunting as a pack. But it does also mean you're looking over your shoulder a bit in case someone starts going up behind you and a couple of times there was some dithering. I'd set goal at Skegness but was aware that it was ambitious on a light day and that others might be heading more south so decided to go with the flow and enjoy the flying. Climb out was fairly straightforward then a bit of dithering as a few went back to get to base over the ridge and so found myself waiting with a sail plane in clearer skies downwind til the gaggle formed. We soon left the edge of the front behind and were into nice skies with regular Cu's and the odd blue hole. The first big climb was over Chesterfield just gone 1pm - 3.5ms-1 to 5300 - but it shows how slow it was having taken almost two hours to cover just 25km. At this point Bob Mepham put his booster on and somehow seemed to step up a gear and powered on ahead and soon disappeared in the distance. Tom Garner and another Red Sigma (Chris Jackson judging by the tables) - went on low ahead while Jim? On a spectra Sigma and I worked efficiently as a team behind them in the next cycle. After some grovelling at New Ollerton, that got us up to 3k I pushed on under a small cloud and met the strongest climb I've ever had in the UK. I saw 5.4ms on the averager but think it might have been a tad more though was too scared to look! It caught us up in a good climb over some solar panels by the A1, but not for long as the others decided to head south of Waddington and after a bit more dithering I changed my mind and went for the gap with Scampton, trying to stay closer to the route to Skeggy, and with Lincoln as a backup train station. A long glide brought me in at about 2k and resisting the temptation to go over the main part of the town and clip the D zone, I suddenly spotted a swirl on a corn field on the other side of town. By the time I was over it, it had formed into a huge vortex on the wheat like a giant crop circle. Sure enough there was a solid climb above it - not as big as I expected but still pretty good. After a few hundred feet, I looked down and there was not a flicker on the field where it had been - it had detached and calm returned - amazing to see a thermal marked out like that. After that the climbs became less good and after so long in the air impatience set in, and 1up seemed hardly worth it - and rather than stick with some less good stuff I pushed on too hard and ran out of luck. A kind farmer gave me a lift to Horncastle with just enough time for a pint before the bus to Lincoln. With a bit more determination Skeggy might have been doable - assuming the sea breeze was not too strong - but 6 hours in the air with a great group of pilots and a second Bradwell ton this year made for an awesome day!