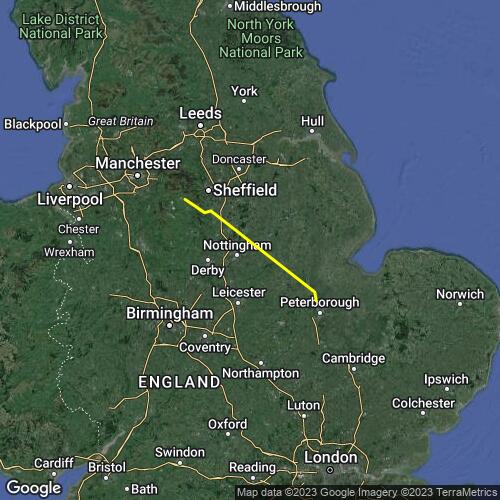 Not a story but just a few thoughts on this flight.

At nearly eight hours, it's easily my longest flight and the thought that strikes me is respect to the X-Alps athletes. My sea legs have just about faded from all the turning but I still have numb fingers from a bit of cold and the brake pressure. They do that each day and then climb 2000m peaks several times.

After a pretty easy climb out - must have been forty odd gliders at Bradwell pointing out the early climbs, Chris, Rich and I gaggled up and topped up over Eyam. Almost disastrous flop onto Curbar which started the slow flying. High, dry, dark moorland was working even though we were out of cycle but took nearly 3 hours to go the 30km to Chesterfield.

Flying on and off with Ash Ginn and then Neil Furmage. Joined at Chesterfield by Jake on the Alpina who'd gone back to the hill and obviously had an easier time getting out of the Peaks.

Down track from Chesterfield to Nottingham is a land of sheds, presumably distribution centres and factories but you never see the extent of this stuff from being on the motorway.

The gaggle flying potentially slowed us down a little but we had good discipline to keep the 4 or 5 of us together. A climb would fade near it's top and alone you'd just widen your search, fail to pick anything up and then just leave. As a group you're looking to see if anyone around has found something better and it then takes longer to reach a decision.

Talking of decisions, we'd set the goal of Peterborough but the slow flying and then the southerly thermal drift we got mid flight made us think that was unrealistic so we were planning to land at Grantham ~ 75km. A series of good climbs and lightening winds made us think Peterborough was realistic even though the time was 5pm. It is mid summer - make hay whilst the sun shines. I landed on the outskirts of Peterborough with Chris in the next village at gone 7pm. The energy had left the day by then. Jake followed by Rich had got a mission on and set off for goal a little sooner, finding some good climbs that Chris and I didn't really find on the way.

The inversion strengthened towards the base at 5500 feet. At our highest ~1800m it was striking the grey murk out to the horizon contrasted with the fresh blue right above it.

We had a call from general aviation around Grantham - just wishing us a pleasant flight but the chances of GA being on our 143.850 MHz VHF Amateur band rather than being on Airband are vanishingly small. He must have had a scanner and been listening in to our calls to pickup our location. He said he was passing under us and that happened at about the time a Hurricane or something with a decent sized engine and camouflage markings passed under us.

Saw quite a few posh houses - Chatsworth near Curbar, Grimsthorpe Castle, Hardwick Hall and Bolsover Castle both on the M1.

Mansfield appeared to have a crime problem due to all the sirens there, although we had some great climbs there.

Close call getting round the ATZ airspace at Syerston airbase. Although the only activity was an RAF roundel badged sailplane that pimped off several of my low saves there. I'd gotten disconnected from the group at this point and had to go off and search for climbs coming off the villages south of Newark. Worked nicely in the end and when they saw my 2 up I got some company fairly quickly.

Lovely retrieve. Walking out of Northborough village a car pulled over, having read the Pilot - Lift Please sign on my glider bag. I didn't even have my thumb out. Annette was on her way home from a Nandos meal with her daughter and didn't mind taking the scenic route into town to drop us at the station. Passed retirement she's become a bit of a thrill seeker and is off to north Wales to do the Llanberis zip wire. She even offered to pick Chris up as we passed in the next village. It's been a year of retrieves as good as the flying: -)