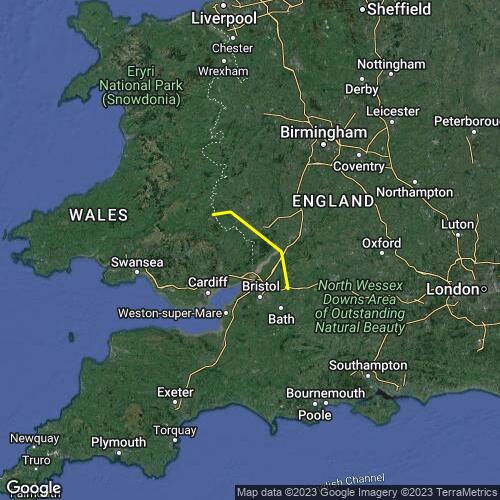 It was a difficult call for the day which was left until the very last minute. Got to take-off and a few were already set up. There was a decent breeze and some school pupils were soaring. I took off five minutes after Tosh and within a very short time we were climbing to base together. We waited around for others but eventually decided to push on. Later, Tosh went on after waiting a while for me as I was struggling to get established in a lowish thermal. I saw Dan Starsmore find a low save which took him to base and shot across there to work that one. I didn't see either of them again.

There was an inversion at about 3100-3200' which wasn't very friendly and I was just above it when I reached the river. A lovely climb over the river to base and I then headed more south. Picked up a low save at some solar panels on the edge of Dursley and was back up to base. Much smoother this side of the river. Seemed to be no low inversion. My intention then was to fly home, so I took climbs crosswind along the Cotswold escarpment. Then I spotted Badminton House and home. I flew on past to the M4 to get 80km and came back and then spent a very long time trying to get down.

Two firsts in one flight - crossing the Severn and landing at home. Whoopee ☺