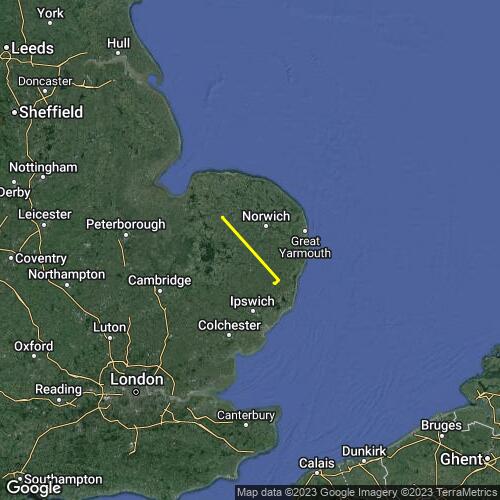 Quite an unexpected flight, although I thought the day hD a lot of potential, there was a lot 9f talk about it being to windy to tow, and our Winchmore also said he would come out to winch until later. I also had a number of Tow Conversion pilots turning up so I figured I would winch the pi, ots wanting to go xc up and whenthey have flown the nest, I would work on the theory with the TC pilots with the aim to get them flying in the evening. As it turned out another winchman was planning on flying later on in the day, so offered to to winch, while I had a fly.

Be rude not to take, it but having no water, no coat I took off, bad start, left hand got caught in ymy risers some how brake pinged out of my hand in to the lines, with the wing veering off line to my right, I managed to reach up with my hand still stuck and hook the brake line with my little finger and bring the wing online, with a little height I could free my left hand and compose myself for the rest of the Tow.

Released and thought this is lifty, very little searching I started to climb, with some serious drift. I needed to crosswind pretty quick and not overly high to make sure I missed Norwich airspace and flew through Shipdham ATZ which is only activate day notam, but still the first time actually flew through it, seemed strange looking down the upwind side of the runway, I got quite low from the crosswinding. Finally getting up to around 3k ft. Was fairly chilli in just a thin jumper, but not bad.

The rest of the flight was pretty much text book climb glide down wind climb, the pilot who got away 3 lines earlier was 16km in front according to my flarm and 16km he remained for most of the flight, I never did see him in the air. I noticed after wards we took different routes around the next ATZ we did have to avoid, me going by on the northern side while Darren took the westerly side.

Down to 800ft working very light lift, A buzzard and red kite appeared from nowhere, cross wind from me, I left what I had to join them, thinking I've made a mistake leaving lift low for something better, but was rewarded with a good climb to 3k again with the birds getting really close what a blessing this sport can be. They certainly saved me.

Some thermally with the sail planes coming out of Tibenham. Made me feel a. Title uneasy, but stuck with it and another climb to base.

The end of the flight I just ran out of skill and experience dealing with the sea breeze, my last main climb I think was in the converging air mass, it felt a lot colder in fact cold enough for me not to take those few extra turns near base. A few cumulus to my east towards the coast but I didn't think I could reach the coast from 3500ft and worried I would cross the sea breeze front, so turned more southerly and eventually westerly but still got the wrong side of it, wasn't overly pleasant flying in the mixing air and eventually landed in the sea breeze.

Great flight, a UK PB for me and even better being from my local club. Thanks to all at the field that make it happen, towing is very much a team sport.