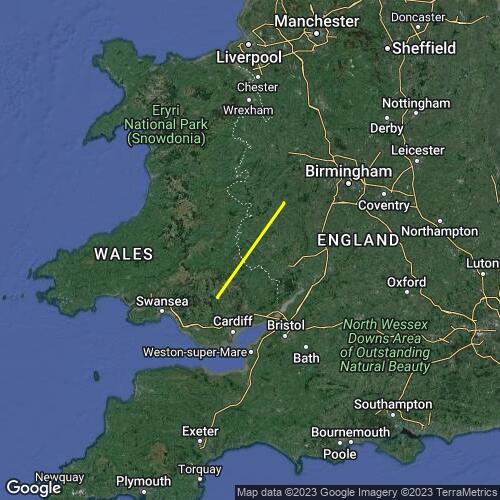 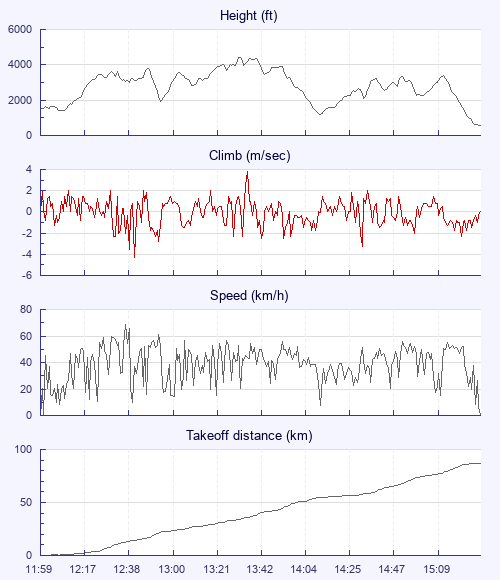 Heads cleared and off to Merthyr for our last joust. It managed to be windy and way off to the south but still with no lift. A few gliders were getting away, ish but more were going down to the valley bottom. I launched, managed to squeeze back at the top launch again later and just, I mean just, managed to maintain height going along the hill. Richard Meek and I stuck together like glue getting the most out of mincing along the side of the hill. It released a little more as we crossed over the Ffos-y-Fran open cast mine.

We got to base at the dizzying height of three and a bit thousand feet, joining everyone else in the lead gaggles mincing about there. Low base, grey skies inconclusive climbs set the scene for the day - an epic mince fest but one that showed that staying in a tight knit group works. We flew over the campsite, onto Magic Mountain, across the ridges of the Black Mountains and out east, to the north of GCHQ. Our group was pretty good, Theo on tandem with Serina? Rich Meek, Jacob Butty, Lawrie Noctor plus others.

We'd thinned out though and crossing a valley I'd got low with Rich and Lawrie above, a few others ahead. It's early afternoon but the climb comes out of the north end of the bottom of the hill. Odd, but I'll take it. Once out of danger, Rich and I have a good section over to Leominster and catch up with two errant southerners idling about. Hugh Miller and Jim Mallinson shout some abuse at us but we give as good as we got and press on with flying over to the Clee Hills.

Jim takes what looks like an odd line to the south with Hugh in tow. Rich and I are toward the higher ground but it's Jim who connects. I know I probably haven't got the into wind performance to go get the climb but go for it anyway. It's a roll of the dice that doesn't work but who would have thought you could have got 90km out of a grey day and low base. Rich and Jim flop over the hill but Hugh manages to take the day with another 40km. For a southern win. Retrieve perfection continues as I'm offered a lift right back to my van in Aber by a mate of Lawrie's.

Two tasks all so it's an honourable draw although the grumbling continues about lengths of string and open vs turnpoint distances. To be continued next year.

One thing to say is that the flying is second to none in SE Wales. Mountains and sites all over the place is the reason the Dragon Hike and Fly is so successful there. If you get the chance go there. It will not disappoint.