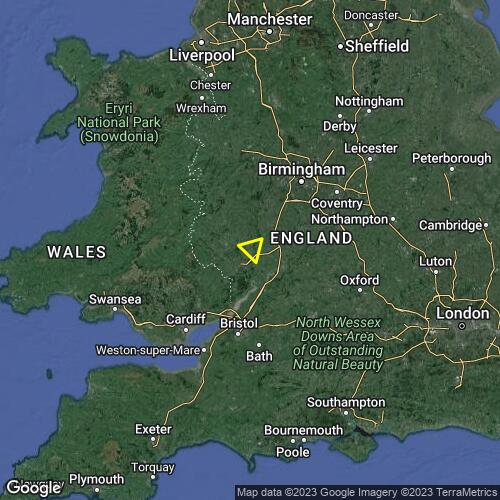 Having had four days in a row at my favourite site of The Malverns, I decided to have a rest day - that is until about 10.15am when I changed my mind and headed off to the Beacon. Got there to see Alex, Joe and Idris already set up along with Mike Byfield. They had set a task of 70k declared and Mike suggested we do it too, be rude not to. Alex and Joe were up pretty quickly with Mike and I joining the climb Idris had found out front - and off we went with Mike and I chasing the others.

At about 18k I thought stuff this I'm going to take the inner line and headed off toward Hereford and then back to the hill. Got low about 5k off the hill and was working some really weak stuff and hunting better and got high enough to take a run for the hill. Came in below hill height and landed in the gorse but did close my triangle. Not quite the landing I had hoped for. So thanks to Al Maguire who happened to be cycling along the path above, and stopped to help me out of the gorse.

What a day and what fun!