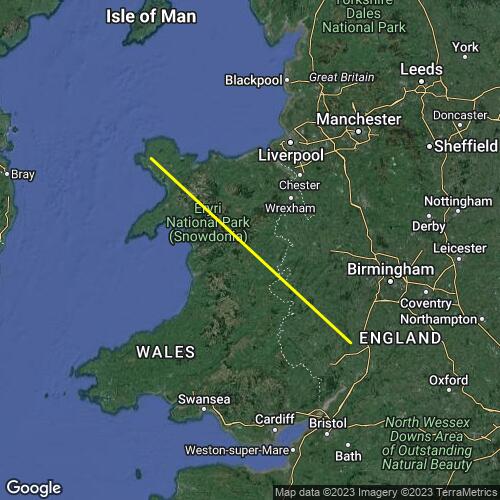 After the last 2 days had promised a bit and then disappointed with too much stability and short xcs I wasnt going to fly today as I was a bit tired after the jab on the weekend.

Got up the hill and it looked crap, inversion at takeoff height and enough wind to soar. But soon clouds started popping way out in front and I could spy some way off to the North. So maybe something could happen. At 12ish the inversion broke and a group of three of us climbed haltinging out (tosh, myself and another Advance Xalps (Well done to Tosh for climbing out of the bottom landing field)). Climbs were broken up so a quick glide to the Beacon as the climb there is normally the strongest. It was.

Heading downwind was fast with 28kph tailwind and streets forming, but after 20k the streets stopped and it looked pretty blue downwind. Time to stop under a cloud and wait for the good air to catch up. I was joined by the Xalps wing and tagged along together as the clouds formed up and sail planes marked the lift ahead.

Damn, the street has ended again, looks milky downwind, change down a few gears and head upwind to a cloud. I could see Tosh a few kms behind on the Flarm but couldn't find him in the haze.

Off I go again as the wispies start downwind, alone now and leaving good retrieve county: /

Heading to the central mountains of Wales the top cover set in and it looked gloomy, taking zeros or half ups at 3000ft to stay above the terrain. It was windy enough anyway. After following some gulls to climb over a hydroelectric lake the sun started to appear again near Porthmadog. And with it the clouds came back. I got back to a decent height.

Looking into Snowdonia the clouds were well over the peaks, it might be on if I could connect with those clouds. This late in the day the clouds seem to work well with huge areas of lift and I was quickly up at base and looking at 20:1 for goal. Hmmmm let keep pushing crosswind under the clouds off the back of Snowden.

Spotting the last cloud before Anglesey I topped out and headed off with 14:1 needed and 25k to goal. Need to thread myself between the 2 military airspaces.

Squeeky bum time wondering if the sea breeze was going to pop up with a grueling headwind for the last few km, luckily it didn't. Tagged the goal at 350m agl and headed from the nearest town hopefully theres a train station.

A crazy day that was very unexpected. Amazing views despite it being hazy.