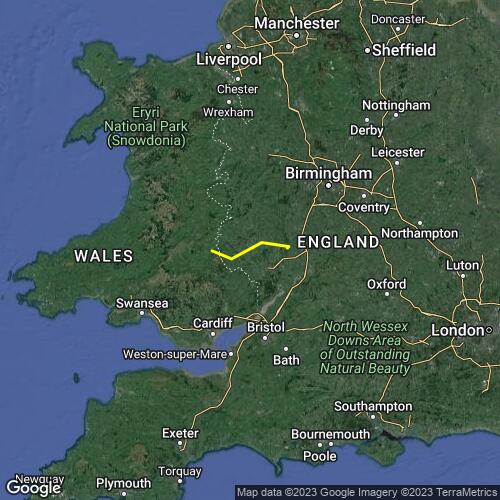 A much better day than I was expecting given the forecast. We left early to avoid the traffic around the M5 junction at Taunton and had time for a leisurely coffee at the Swan at Hanley Swan as we made our way up the hill taking in the bottom landing field for Phil who hadn't landed down there for many years.

We were early on take off, only two others there before us so had a choice of take off spot, always important. Loads of pilots arrived, as usual no-one in a hurry to take off. There was more wind than expected and we waited for the thermals to get going with everyone madly programming instruments, sorting declares and adjusting radios. I don't set a declare although people say I should as the only time I have I flew past it and my Oudie kept telling me to go back and I couldn't remember how to get rid of it!

Wes took off first, started to do well and there was a made dash to get in the air. Soon pilots were scattered along the hill, hunting around and the first gaggle began to form just in front of me. The air was lively and rather broken, tricky to work and I took a couple of turns over the back and decided to push forward again as I didn't think I'd really got it. I moved north of take off and hooked into something much better with several other pilots and away we went.

The first part of the flight we had some quite decent clouds and all worked quite well together, hunting around, and working the fairly broken snotty lift. Eventually I could see a bigger gaggle in front of us and we gradually made our way towards them which showed me how slowly they must have been flying. Given the lack of drift that was no surprise.

I took a few turns with them then but they then headed off into what looked very blue and I thought the sky towards Hereford looked better with some hazy stuff seeming to point the way. It's not often I leave others but I am trying really hard make my own decisions this year and be confident with what I think I can see. It seemed a good time to test that so off I went down this hazy street and it worked. It was very slow, didn't give me mega height but there was always something to work with and it was fun.

I hadn't flown that way before so was very conscious of how close the danger area at Credenhill is to Hereford, my Oudie pinging a warning at me every now and again. I thermalled fairly close, 0.5k, managed to work my way past and then could fully concentrate on climbing again. I had seen two other wings near Hereford but lost sight of them and didn't see which way they went. The lowest point of my flight came just after this but I stuck with the hazy stuff and it kept on working, turning every now and again into a short lived cloud.

I flew on and then spotted a wing some distance ahead of me over what turned out to be a small ridge with satellite dishes out in front, Webton by the look of the map, and not too far from the Black Mountains, how exciting! I took the climb and then glided on, topping up as I went towards the mountains.

Decision time. I was heading straight for Black Hill and needed to decide which way to go. I could see the other wing in front now (looked to be a blue Advance) and it appeared to fly to the hill, climb and then head off into the mountains. I was very conscious of not wanting to get stuck in the Cat's Back (remembering Tim P's experience there) and I hadn't found enough height all day to give me confidence to try flying over the mountains. Smoke on the ground was giving me wind from the south, not a lot but that persuaded me to turn and head along the front of the hill towards Hay Bluff. The views were stunning but sadly my GoPro had run out (it managed 3 hours though) and so I just enjoyed the ride and looking at the snow still on the tops. The sky didn't look particularly good here and I was now getting tired and quite hungry so glided over the carpark and down into the valley to land by the road not far from Glasbury.

A lovely flight with lots to put in the memory bank for next time and some research to do on what height you sensibly need to fly over the Black Mountains. I have done it before but only from the Pandy end over Sugar Loaf to Crickhowell. I don't know who the pilot on the blue wing was but I would love to see the tracklog to know the height and route he/she took. Off to look at my 830 GoPro pics to see if there is more to be learned!