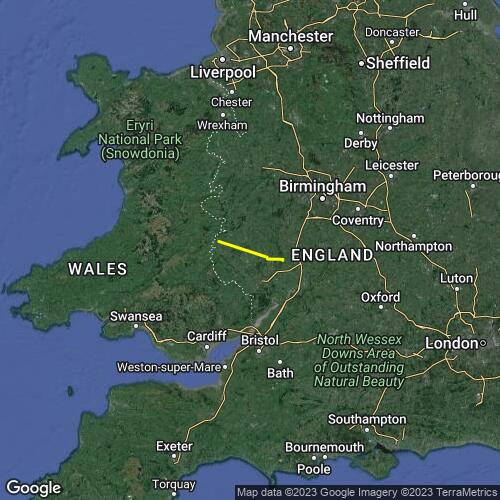 Normally I go to Malvern on the bike but the night before I'd discovered a fork was leaking oil and I had a nail/screw in my rear tyre. The car it was then; this meant a slow journey of 90mins plus £4.40 parking but on the plus side I was warm when I arrived.

50+ pilots were on the hill and after 30mins or so I took off during a lull, flew to the other side of the bowl in buoyant air and back again before joining a thermal just to the left of take off. It felt good so went with it with a few others, taking a while but eventually getting to base about 3600ft (gradually increasing as the flight went on). At this point I was very glad I had a pair of decent gloves, hand warmers and mittens on top, as well as 2 pairs of trousers, two down jackets, a softshell jacket and long sleeve top.

The next 2.5 hours or so was spent happily thermalling with the slow moving gaggles and some familiar wings. I generally set my Gopro to record video and then take screen grabs afterwards from this giving me quite good pictures, and I was just about able to press the record button with mittens on.

Eventually, in quite a bit of pain from my arm and back (I am seeing a chiropractor), and being impatient I left the gaggle and flew off on my own. I found another thermal back to base and another broken one but I had seen a big built up area (Kington) ahead. The sky didn't look great further on so I was drawn to landing at Kington although I was not cold at all.

The best looking landing area turned out to be a school playing field so I spot landed on the football centre spot for which I received applause and cheers from the kids. A man on a bicycle came over to me, was amazed I had flown all the way from Malvern and helpfully directed me to the bus station where he said there was a bus to Hereford.

Shortly afterwards however two men came over, one of which was the school bursor, and he was not happy saying I was a security issue. I apologised and not wanting to receive the cane (again! ) I quickly moved to the field next door to pack up, he was fine about this. As I was doing so 3 other pilots landed in the same school field so I dashed over to tell them. All was well in the end and we shared a £55 taxi back to Kettle Sings, passing the former homes of Mike Oldfield and Ellie Goulding on the way. Cracking day: -)