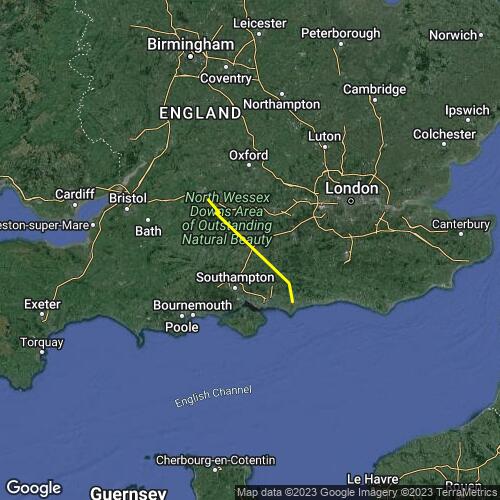 The day started by arriving at Combe around 9.30. Stood on the hill, it soon became obvious that the wind had a large westerly component. When someone inflated their wing to was facing along the slope towards the west… Not good. So, what options did we have? I knew Liddington was an option, taking slightly more west than Combe or retreat back to home turf and the mighty Butser West. Naturally, a tough choice but Liddington was worth a shout and afterall, we were in the area.

Half hour later we pulled up at Liddy, no one there and very little breeze at road level. Didn't look too promising but we persevered and walk up… Lets face it, we not exactly talking about a big hill and another few minutes saw us at the top. Oddly, I always find that a bit of a slog. Anyway, wind was more north than anticipated but still on the hill enough to fly. Big brown fields out front and a tractor driving up and down, perfect combination. Clouds were starting to look good and with some streeting to the NW it was worth a go.

So, what to do? Declare somewhere downwind or a mini triangle, I opted for the triangle as I thought the wind was going to be light. Liddy to Hungerford to Marlborough and back to Liddy. Sounded alright to me, plus it didn't leave Steve on his own for too long. Although we had made arrangements with the car keys and what to do in the event of going XC… More specifically, me going XC.

With a few short hops looking for lift and the odd walk up the slope, the fields needed more cooking! Didn't have to wait long, stood there waiting for a breeze it went very still and then started to blow… Game on! Thermal inbound 😊. Sure enough, a couple of beats along the top fence line and things were getting better and I was gradually getting higher. Pushing out front over the fields I was finally rewarded with a nice climb. I'd told Steve beforehand that I wouldn't go over the back with anything less than 3000 ft, at 3800 ft I stayed with it and found myself at base.

The original idea was for Steve to join me on XC, I'd previously told him about places to aim for and good landing options. Of course, he needed to climb out as well. Unfortunately that didn't quite happen for him and he stayed on the hill. At base and a final look down to the hill I saw Steve had landed, off I went. First port of call Aldbourne, some 7km downwind and normally a good climb somewhere thereabouts. Plus, I always think it's good to get settled into the flight and take things easy at first with little goals as you go. As it was, my track was slightly west of Aldbourne as I was cloud hopping and more or less made my first triangle turn point on some high ground near Hungerford in one glide… Roughly 15 km away. From there it was onto Marlborough, into wind. After several tries and climbs off Ramsbury I gave up on that idea and opted for downwind with my initial target of Petersfield about 75 km away. I changed my mind on goal as into wind heading to Marlborough when trying the triangle was simply far too slow and my glide ratio was horrifically bad.

Heading downwind my obvious track was straight over the top of Combe and the trade route to the South coast. A nice climb before Combe saw me fly over the hill watching a few on the ground not doing much, a good climb near the wind turbine over the back of Combe saw me back at base and a decision to make as I was headed for a blue hole. Which cloud street to aim for, I opted for the one slightly further east as it seemed to give me a better line to Whitchurch.

My preferred track is always a line between Whitchurch and Overton. Sure enough, with an intermediate climb half way between Combe and Whitchurch I was crossing the A34 just north of Whitchurch. Another nice climb saw me back at base and heading for Popham. Transiting Popham airfield, high and just to the south I had another good climb from the edge of the wood, text book source with trigger point. Watching a micro-light take-off from Popam I kept an eye on where he went. At base again and another glide/climb I could see Four Marks in the distance. Definitely didn't want to go down anywhere in this area, makes for a complicated retrieve.

There was much more blue-sky by the time I was near Four Marks so I was making the most of every climb flying over villages and whatever clouds I could reach within an easy glide. Every now and then I got the odd whiff of smoke and made the most of the climbs nearby, once I found them. Smell is always a good sense to use when hunting for lift… Smoke or cow shit are perfect, no matter how high you are!

By now I had Petersfield in my sights, it got to the stage of one more climb and I knew I'd reach the town in one long glide. Sure enough, I arrived over Petersfield about 700 above ground and checking out landing options if needed. I knew that one wrong turn would see me on the ground. I'd been in the air some 3 hours and thought the day was slowing down a little. But, in the spirit of never giving up till my feet are brushing the tree tops I looked for a climb. Downwind of the supermarket car park up I went back to base with one climb of around 3000 ft in one blast… Happy days. Time for another glide, taking me past South Harting and onto the South Downs. With the wind definitely from the North/North West getting much further east was going to be hard work and I reckoned there was only about another hour of good thermals.

Decision made, head to Chichester and the coast if possible. I waved at those flying Harting Down, although they wouldn't have seen that given I was quite high. With the Oudie shouting at me again warning of airspace I started to pay more attention to the route and getting to Chichester. With Goodwood ATZ, I needed to be careful. Easiest track being to the west of the town. I hopped over the South Downs escarpment with plenty of height and headed for a wooded hillside facing roughly NW, I though it'd be good for a climb. Down to a couple of thousand feet with a weak climb, I knew Chichester was in range… Just. My distance log was telling me I was about 95km from take-off, obviously I knew the 100km was on although one more climb would make things less stressful. Sure enough, off the wooded hill-side, up I went, albeit very slowly. The few hundred feet was enough for me to be happy with one more glide as I watched my distance gradually creep over the 100 km mark, always very nice and time for some self-congratulations. Never ceases to amaze me how long it takes to go through 98, 99 and then the magic 100. Job done. I spotted some nice open fields just south of the town and checking for wires and an easy exit to the road I landed. During the four hours I'd been in the air, poor olde Steve had been left on the hill all by himself. Being the superstar he is, (and he didn't have much other option) he moved my car back to Fareham to where he'd left his. Stashing the keys for me to retrieve later. My self-retrieve was simply, train to Fareham from Chichester and simply collect my car.

I'd been in the air a little over 4 hours. Satisfied, most certainly was. Given it's only March I thought I'd made the most of the day in some difficult conditions. Ended up at 107km as a turn-point flight or 101km open distance. Until the next time… 😊