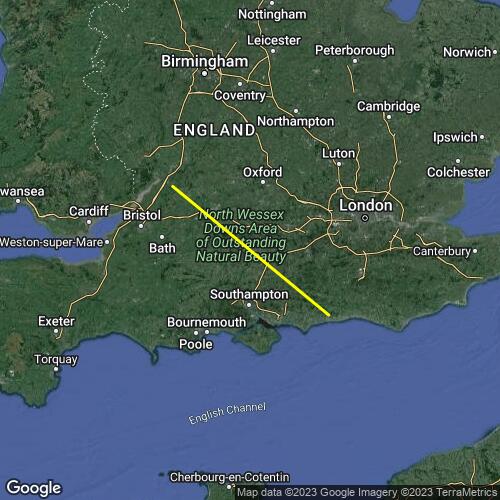 After a long winter, finally a decent forecast, the local gliding club weather looked ok, rasp had colour for the first time this year so I talked Graham into a early start as Selsley incase the predicted strong wind kicked in. On take off by 10:30 the wind was light, clouds were popping so grey asked where we should put goal, when I said Arundel, he laughed at me? To which I replied atleast we'll have a line to follow and tbh I'd be happy to make the train at Swindon (40k)

By 10:45 I was clipped in, walked down the front and was surprised how windy it had got, time to go. The air was working but it took 15mins till a half decent climb came through about 8 of us slowly climbed over the back but Graham and many others had missed it, as I climbed over the back the pilots we left behind found a climb so I opted to sit in the broken lift I was in until we all meet up, soon there was about 15 gliders near base so off I went, not long after I was low over the back but found a snotty climb that was slowly rising, a km West was Tom Cole climbing at about the same rate, I was close enough to get to him if he suddenly found the core but he soon came to join me, back near base we were joined by graham and Ollie clothier and off we went.

The forecast NW was ideal, the clouds not so much. Looking downwind, to the east was blue, to the west were clouds so we were forced to take a much more southerly route than was ideal. As a gaggle of four we pushed on quite fast, the route past Swindon was pretty straight forward but a long glide was needed over the ridgeway, I led out and got pretty low before finding a climb allowing the others to fly in above me, this frustrated me as I searched frantically for a stronger core, I soon realised there wasn't one and got left behind by Tom and Ollie, luckily grey waited for me at base and 10k later we all met back up.

Still being pushed south chasing the clouds I wasn't to worried as the forecast was to go WNW which would help out later. By now we were over Andover, getting closer and closer to Southampton airspace which was gunna require and big push crosswind into the blue, off we went on a huge glide to the nxt usable cloud, 2/3s of the way graham and I found a little bubble and decided to take it, sadly Ollie pushed hard towards the nxt cloud and unfortunately landed at 105k, Tom had got stuck around Andover and was now a few k behind also.

We had a ok sky as we headed towards petersfield but arrived quite low under some decaying clouds. Graham found the core and was soon thousands of feet above me, when I eventually found the climb I watched Tom fly to his goal at petersfield and land, graham had pushed crosswind towards the coast around the 4500ft limit by I had no choice but to drift under it, all ok as the climb was slow and the wind was now wnw, perfect. One more glide had me climbing again, clear of airspace which allowed me to climb to 5000ft needing 7:1 glide to goal, a few km behind graham had been caught by joe dart and soon they were gliding in behind me. Over goal the lift was abundant so we decided to fly on another 8k to land at the train station,20 minutes later we were on the train heading home.

All in all a great day out, I was expecting rough spring air but it was all quite predictable, what seemed a stupid goal had been achieved, in hindsight we were glad we set it as it gave us an incentive to push for it. Without the goal I think we would have both landed far earlier! What a start to the season!