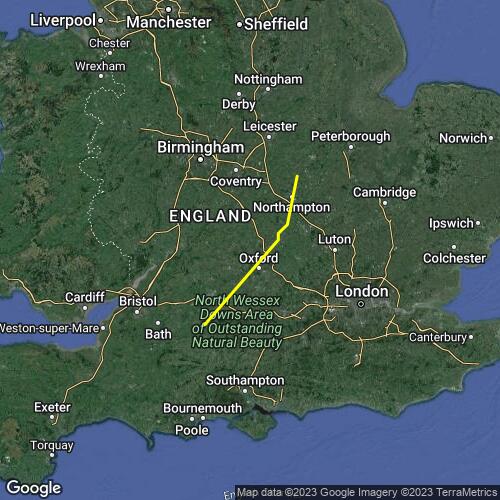 A pessimistic start to the day, top cover. By the time I got to the hill, it had cleared to form a nice blue hole with cloud forming. Still not hopeful, I set a task at 114km (ladybridge park) Northampton but didnt think I would make it. Launch was easy and quick, large plowed field out front with birds marking everything. Low base made the first 10km over higher ground tricky, but working with the gaggle we cleared off toward Oxford. I found myself pushing forward faster than most pilots (about 10 left the hill together, thinning to 5 at Oxford) and doubling back toward a marked thermal if needed (only done once) this quite aggressive style put me quite far ahead at Oxford, where I lost everyone. Most pilots opted to head more east with the wind, I instead stepped more North West toward goal at Northhampton, which I made on a nice glide. Sadly I must have messed up with declaring, but no big deal as goal was only an extra 4-5k score over eventual open distance. However, pushing for the goal was not a great move, Northhampton only provided scratchy weak thermals and I failed to make cloudbase again, and was put down just west of Kettering. Absolutely no complaints, epic day. £150 retrieve though 😡