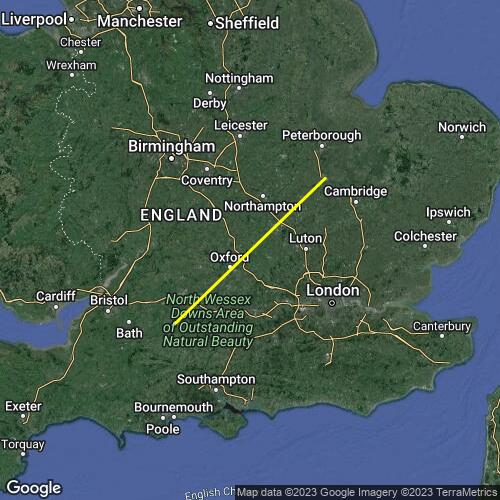 Okay, I'll admit it. I've wanted to do 100k for a very long time. Who hasn't! But recently my XC attempts were starting to depress me. Enter the three Yodas. Well, Paul J, Rob K and Peggy. With a special mention for Ben F. Wise words and good counsel from each appears to have worked. To save you any tension or stress I'll state right away - I flew my first 100k! There. I've said it. Read on if you want, but the important news out: -)

So, what kind of extraordinary day was it?

Arrival at the hill was met with "What! Golden Ball car park empty! Hmmm. Had others seen something we'd missed? " But once on MHWH Malcolm et al were already enjoying some early thermals. A good sign. Later, everyone watched as a gaggle of around 20 birds slowly climbed out, with only James A and Malcolm prepared to give it a go. They got up, but not high enough to commit to leaving the hill. Paul J was next off, pushing way out front chasing another flock of birds. He came back really low and did well to get up. I went off just after Paul and found a weak climb by take-off, and within minutes two gaggles started the slow climb to base.

The gaggles linked up with gliders from GB, and for the first 15k or so the sky was busy with gliders. The usual suspects pushed on whilst the rest of us stuck within a short glide of each other until we reached Oxford, then shazam! Everyone kind of split up. I then flew with Paul et al all the way to Milton Keynes before we split; two going down wind, me attempting to go cross wind, and two others, well. Doing their stuff. I never thought I'd make it to my declared goal until Ks to goal dropped into the teens. And I hadn't noticed I'd done the century until well on the way to the goal.