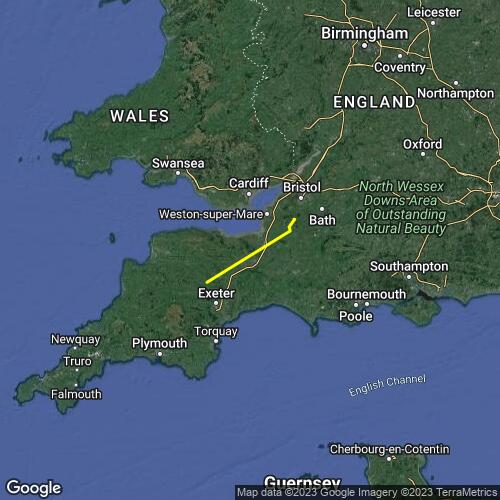 A very technical and challenging flight, hardest to date.

Arrived at Ubley 10.45ish. Smooth breeze changed to strong cycles. After an hour wait with a slow moving sky and few birds, I took a chance and launched before 2 others. Scratched for a few minutes and then Nick S pointed out a turning gull down the hill. This paid off with a climb to base. Thanks Nick. I headed directly south, slightly against the NE wind to follow good cloud and avoid the levels. In hindsight I should have just gone downwind after watching Nick launch 10 mins after me and catch up by doing just that. Thermals were small and broken but built into strong rough lift. After a good climb to base over Bridgewater I had my first full collapse on my Queen 2. Despite lack of SIV my reaction felt built in as I brought the brakes down quick while the wing was parachutal and controlled reinflation with almost no forward swing. Quite chuffed but buzzed, took a quick glide to assess that I was happy to continue. Abandoned 100k goal at about 50k due to more east than forecast. A couple of low saves after that including one just 200ft above a small ridge with lethal 7ms bursts. Took me to base but was my rowdiest thermal to date. If I already had a good flight distance opened, I would have left it. Thermals getting rougher, I began to realise that wind direction was variable. GPS wind kept changing and windmills pointing opposite directions just a few KM apart. When I touched down there was definitely lift available but I was bored of getting rolled about, and settled near Tiverton. Extremely hard and satisfying flight.