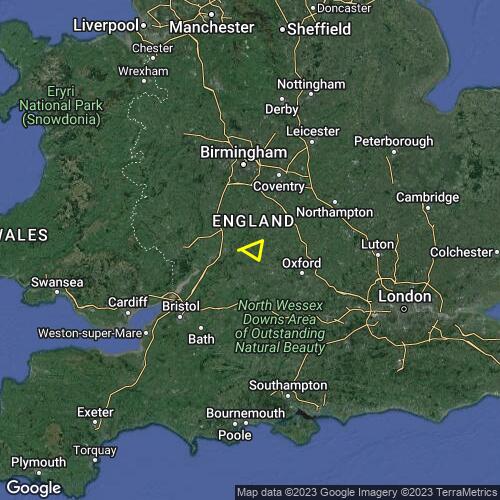 It was a questionable day but I suggested we go out and everyone said it was worth a go. That was a good decision! Towing the first up led to almost everyone getting off on first tow. I managed to avoid that and had repeated attempts, along with Peggy, and Rupert. I was about to give up and I thought, 'just one more', spurred on by the cloud that was sitting over the field. I got away, following Peggy on a slow climb. I really didnt have a plan as my declared triangle would need a long headwind section. I thought about trying for the South Coast but hadnt checked NOTAMs. I really couldnt decide and fluffed up a transition by leaving far too low. A hangover wasnt helping either! There I was 300 ft above the deck, at 5k, expecting a long walk out. PING! Up I went, to 4500ft and base. I thought I might as well try a triangle and did a first TP at 15k, and turned west. Good clouds and the drift I had noted seem to have decreased. I got to Great Rissington airfield and turned North. Again, no headwind, going towards Bourton in the Water, and Stow in the Wold. Sweet! I stayed pretty high up towards Moreton in the March, but then got low. I had to backtrack a couple of times to be sure of a climb. From Moreton, there was a long street that had set up. Heading under it, I got bouyanf air, but was steadily losing height. At least there was no headwind. Finally I connected and strong lift took me to base at around 5000ft+. From there it was a doddle, and I headed back to the launch, and burned off the height by going west to extend the triangle. I arrived to see most of the other pilots who had hung around to thank me for calling the day, and to congratulate me on my 52k FAI triangle! Very nice! Pity all the surrounding pubs were closed. My first decent score of the season!