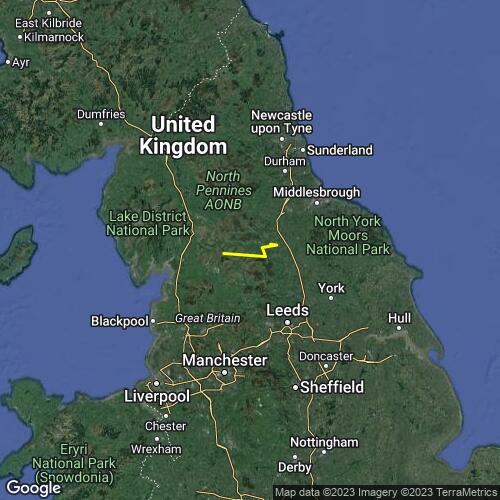 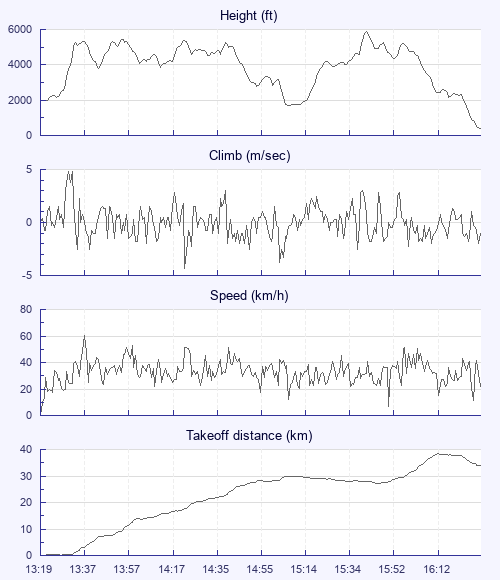 Started with nil wind on the hill and even the best pilots were slope/bottom landing. My first try lead to a side landing just below the fell wall, but from there I was just in time to grab a strong thermal coming up the face. It took a while to find the best of it and I wasn't at all sure it was going to work as I hunted about, but then found a rocket of 4.8 and soon got to base just ahead of the others.

Triangles had been planned by most but I'm not that good and a lot of directions looked blue, so with a light westerly I headed downwind towards the best clouds. It worked well and I stayed ahead till around Buckden. Though not too sinlky, the lift seemed to be getting weaker and weaker and I was looking forward to the others catching up. I've not had many opportunities to gaggle fly and was really keen for the extra help. Baz was there first and together we found the limited lift that was on offer, but he then pushed on a little to the NE which looked a bit sinky. Others starting passing me and I held back a bit to see who it was working for. Holding back found a nice 2m/s and topped up, popping into cloud briefly, then followed Ed and Ben(? ) who were now well across Coverdale towards Little Whernside.

As I pushed on towards them my phone/app battery packed up - an external battery it seemed had failed (later realised I should have turned it on! )… Ben pealed East, Ed a little North, I followed the high ground in between. I could see Dave S around Lofthouse to my South, fairly low and he wasn't getting any good climbs. I soon lost Ben from sight and although Ed was high over Carlton Moor I was getting low around Colsterdale and I wouldn't get back to him. I kept finding rough patches and thinking I was about to hit strong lift, but it never came. I had may vario but without any instruments I didn't know my groundspeed. Glide felt poor but I couldn't see any sure signs of wind direction. I imagined it must be sea breezing from the East… That would account for the rough patches.

I was sinking down into Colsterdale and my best line to civilisation was now a poor glide east into wind. It was about 3.00 and I only had about 400' to play with. As a last chance I headed for the rocks on the south facing valleyside and found I was just about maintaining… Worth hanging about I thought. I turned and turned and lift slowly improved as I very slowly drifed back in what was now a SE. It took half an hour to get to base but ended with a 3m/s and cloud developing around me.

It was around now that Ed had reappeared. I had thoughts of heading south where the best clouds appeared to be, or north along the sea breeze front, but I knew North had danger areas and with a dead battery and no airspace I thought I best stick with Ed. So we wandered up towards Leyburn, topped up, then pushed out into the blue towards Bedale. It was wise to stick with Ed cause we were getting pretty close to Leeming Bar… And a RAF Hawk that had been messing around to the North came and played with us flying big circles around us at our altitude.

We doubled back towards Leyburn. Ed was doing better on glide so landed just a couple of km ahead of me and I picked a field on the edge of Constable Burton, landing in a SE at 4.30… Over 3hrs flying. Lovely and sunny under a clear blue sky, I packed up with the RAF Hawk still burning about in circles somewhere nearby.

Hitching back to Leyburn on that road had plenty of cars but only one short lift half and then a sweaty 3 mile walk. Ed was sat outside Bolton Arms with Dave and Westie who'd landed in Masham, Baz had managed to hitch back to Hawes and return to retrieve us. Beers all round.

Back at Ingleton, Mason's Arms, we were in the pub again to meet Ben, Geoff C and Mike. All with very satisfying days but Geoff and Mike scoring highest with a 140.9 triangle… A new Dales record?