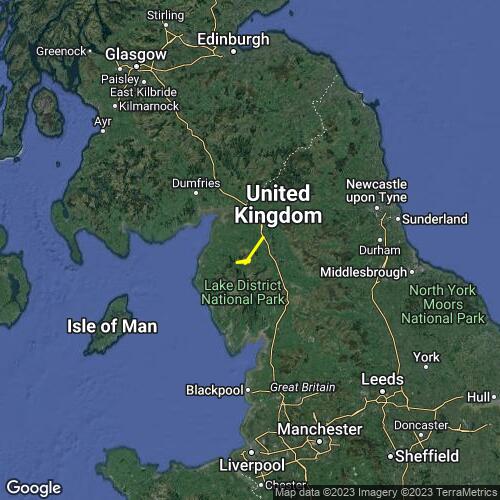 I'm writing this "story" because Viv Fouracre encouraged us to use this section of the record page. I would not otherwise have chosen to publish what could be called " How not to compete and still stumble on the goal". For those that are not familiar with the Lakes Charity Classic, it is a friendly competition run by the Cumbria Soaring Club, which manages to raise several thousand pounds every year for local and other charities, and has an A comp, a B comp and a coaching group. I was flying in the A comp, and Mike Cavanagh briefed us for an elapsed time task, with a cat's cradle of turnpoints around the Blencathra massif and then a route northeast to the M6. Mistake one for me was not to take the time to get the route into my Oudie after a small problem with a couple of waypoint names. Fortunately, Richard Bungay was offering to zap the route to FlySkyHy on people's phone, so I was delighted to get the work done for free, though I had never used FlySkyHy for a task before. I thought it would be easy, and, anyway, I had the route in my head, didn't I? I decided as the wind was light at the lower launch to climb up to the higher part of the fell. When I got there the wind had increased considerably, so I had to wait for a while to launch. This was fortunate, as those who had got away earlier were demonstrating that the valley was not working well, and using the dynamic lift on the mountain was the better option, though it was a bit lumpy in places. Having been back and forth a few times I looked at the phone and instead of the route I saw my face (not a pretty sight) and tried to recover navigation mode. No luck with the gloves on, so reverted to memory and found I could not remember if we had to visit the second waypoint again, so went there anyway just in case ( into wind, of course). When I finally got the glove off and navigation back, I realised that I had wasted the effort on that waypoint, and headed back to Blencathra summit to get high and make for Carrock Fell. I was nor really racing, using full bar only occasionally, because you are not going to compete with C and D gliders whatever you do, but I did not get enough height on the first climb, slid down the valley behind Scales Fell, scratched round the corner and back to Blencathra summit. This time I got enough height to make Carrock Fell, scraped over the top, found a small thermal that strengthened with height and eventually delivered me to the sea breeze front, which conveniently aligned with goal. I arrived there at 3500 feet, thought about continuing east, decided that a guaranteed lift was better than maybe no lift at all, spiralled down and misjudged the strength of the breeze (despite having seen someone else make an approach a few minutes earlier) and landed untidily in the undershoot field which was inhabited by curious cows. Once over the fence, things got better, and I was soon speeding towards Grasmere in the back of Bud's car. Lots of mistakes to learn from, but I was happy to make goal and 10th place on a B.