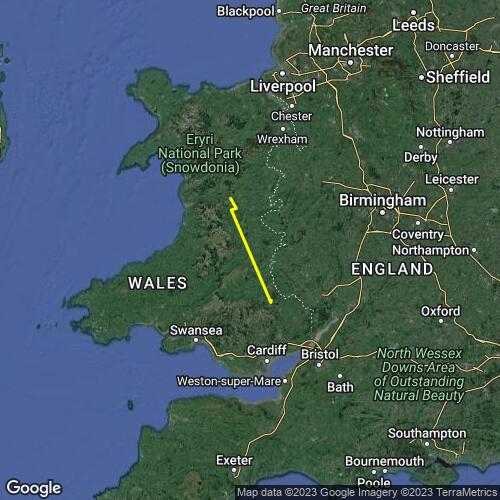 I picked Remi up at 7.30 and we were on the hill just after 12 after what felt like a monster walk up. The wind was perfect strength but not quite on either face so we walked to the face where it was slightly stronger and set up. After about 45 mins of scratching around in broken choppy thermals with the wind coming slightly across the hill, Remi, Andy Brown and Simon Green climbed out. After another 30 mins of trying to work it and failing while getting bashed about a bit I was tempted to head back to the car and start heading NW to retrieve. The day had a frustrating feel about it and I was tempted to give up. A few minutes later though I got enough height to push out front and I found the sweetest, smoothest climb and I was gone!

The 1st 30k was exhausting. At one point when trying to find a final climb to leave the Brecons with I parked myself low above the last ridge available hoping to find a thermal only to find it incredibly rough and I was being blown slightly backwards. I was too low to turn and run and it was too rough to use speed bar. A few seconds of trying to work out which option was least likely to kill me was enough time for the thermal to push through and give me another smooth but strong climb out. Thank Feck for that!

Things got much easier later and it was just a case of see a cloud with another good one near to it and fly at it. After another 40k or so there was a lovely cloud street heading NW from the west of Llanidloes going into what looked like the boonies. By that time it was around 5pm and I wasn't convinced that the clouds would keep working long enough to get a good distance through the middle of nowhere.

All I could think about was I needed a pee and my pee tube was off and that there's a main road and a railway line to the north east. Also I was aware that I'd get my PB so i just stopped wanting it so much and switched off. At that point I just kept cross winding to the north east until I hit the deck.

90 mins or so later Ali Andrews uses the same cloud street and races up towards snowdonia. Meanwhile I'm on the ground very happy with such a fun flight but kicking myself for not just following the sky I could see and just taking the convenient option. Maybe I was tired after 4.5 hours but there was certainly a greater distance to be had. It just needed a bit more determination and balls. Silly thing is that I had my vol biv kit with me so being in the middle of nowhere would've been a lovely mini adventure. What was I thinking!

All in all it was a great day. Remi flew over the top of Snowdonia and had what he described as "the most beautiful uk flight I've ever had" Andy got 4 PB's in one flight, Stephen Bennett got a PB and it was my 2nd PB this season.