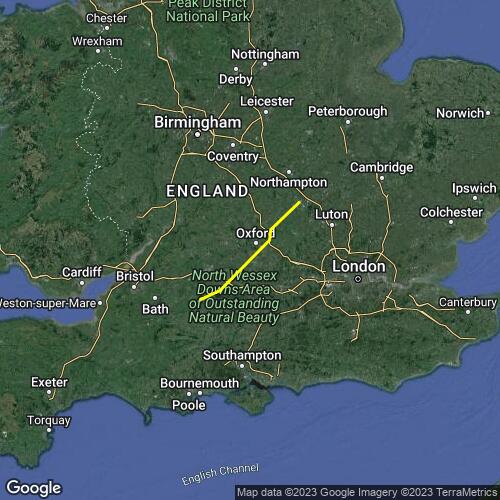 Blimey, this is a bit serious I thought, could spell trouble. Oh well, no XC flight wouldn't be the same without at least one low save. At 95k, just when I was really beginning to think it was job done and another 100k was in the bag. What's that saying about counting your chickens before they hatch… Or it's never over until the fat bird sings… Anyway, when low I fly the ground plus the clouds depending on whether they look like they're working. In my case, there I was at 500 feet above the deck and hunting for a good thermal source/ trigger combination. So, where was I and what options did I have? Well, I was at that well known disused World War 2 airfield of RAF Horwood. Just in case you was wondering, it was in service from 1942 to 1946 and used as a bomber command training base. Unfortunately, these days we're not allowed to bomb the Germans anymore so it's reverted back to good old farming. However, for the keen eyed paraglider pilot some useful bits are still around. I spotted a reasonably large area of concrete apron with a nice little copse on the downwind side. That meant one thing to me, thermal source and trigger point. Given I was at just over 95k from take off I didn't really care if I didn't get back to base, all I needed was a few hundred feet and I knew I could glide over the 100k line. As it turned out, my concrete source sent me all the way back over 4000 feet. I knew the job was done, another 100k in the bag… Yawn. Next dilemma was whether to carry on to Bedford or simply land at my target field in Milton Keynes. It was getting late, I hadn't taken off until after 2 PM and it was now around 5.30. I figured things would be shutting down soon and I really didn't fancy landing mid way between MK and Bedford… That would've been too much hassle just for another few Km's. Decision made, time to land. Arriving over my target at around 3000 it looked bloody small… It was small but from where I was it looked even smaller. I could see people in the park and they certainly looked really small. This is gonna take a while I thought, having spent three and a half hours trying to stay high I was now high but wanted to get down… I'm never happy! Of course, the big advantage of arriving so high above my intended landing field is that I got a really good look at all my options. There were a few other possible landing areas I could go for even when I got down to a few hundred feet, just in case I had to. I always like to have options when landing in built up areas. Needless to say, after what seemed like hours, I was low enough to really concentrate on my landing. Having flown various legs parallel to the park boundary I'd worked out the wind direction. Fair to say, there wasn't much wind to speak of. The slight concern I had was out gliding the park and with no wind it was going to be a fast approach. Finally I was on my base leg keeping a close eye on the tall trees on the park boundary making sure I'd just clear their tops. With hands up it was a quick approach without any breeze to slow me down. That's when I really notice the speed of my rocket ship, with a bit of ground rush, I buried the brakes at around 5 feet, a few quick steps and I was down. Round of applause from everyone in the park, obviously a very discerning crowd who knew they'd witnessed an extremely skilful landing… I simply breathed a sigh of relief that I hadn't screwed it up in front of everyone. That was it, 100+ km even though I hadn't taken off until after 2pm. Happy days. All I had to do now was get back to my car which was at Golden Ball car park. As always, the self retrieve after flying XC is always an adventure. It's amazing how many weird looks you get on the London underground when carrying a large paraglider rucksack. After two train rides and three underground I duly arrived at Pewsey at 2120 or thereabouts. Thankfully, Andrew Craig had been kind enough to give me a lift back to my car. I had tried various taxi options without success, at once point I thought I'd have to walk back to my car. I really didn't fancy that, so a huge thank you to Andrew. Overall, a good day having had a flight I really enjoyed. Until next time… 😂