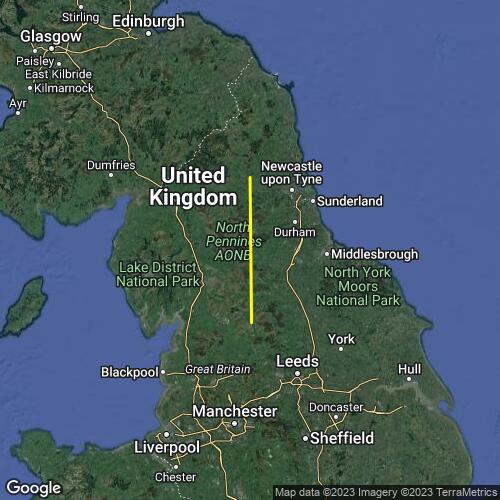 Wow. Just wow. One of the things I love about XC is just not knowing how a day's going to turn out.

Things started well with a proper looking start to the day; non hazy blue skies. Something that's been lacking so far this spring. Met up with Chris Jake and John and then picked up a chilli, cheese and chorizo pie from Threshfield. I will consider making this a good luck charm for me. At the very least it's a fine pie for munching during the walk up. Hawkswick was feeling a little off south at the bottom but with the forecast to veer it was only a matter of time before it came on. Customary hellos at the top, Tam, Andy, Rosie and Ben were already there and then a reset of goal to north of Hexam. That would keep us clear of the Newcastle corridor and in the forecast Pennine convergence zone that had been indicated on RASP.

Clip in and Chris is away early doors (11am) leaving us a little becalmed on the deck. A few uninviting cycles came through and then I launched just after Jake. The sky looked as though it was working well and it didn't take long to connect with the climb that took us all the way up. I climbed out with John at 2 to 3 m/s in pushy but not rough air. What do you expect in spring? We topped our at five grand with Andy and set off over to Starbotton in pursuit of Chris and Jake. More topping up over Buckden and then onto the first test; getting over Wensleydale.

This felt a little slow and Chris and I didn't want to waste the day by flying into the ground. We climbed out together over Worton and Nappa but didn't top out. It left us sinking out towards the end of the moor before dropping into Swaledale. We both stumbled into a sort of lee sider - it was releasing from the back of the moor and this boomed us back into orbit. Definitely some moments in that one where looking at your wing the best option.

The gaggle was getting split at this point, I was certainly feeling pushed to keep up with three Zenos with faster, more decisive pilots. Looking back Andy was maybe having difficulty around Swaledale. I was getting low again by the A66 and this slowed me down. Martin was able to get in sight at this point. He'd been a couple of climbs behind up until now. There was a SW rocky ridge ahead and sun on it so that was my target to get out of the boondocks. It started working before I got there and I climbed slowly until over the A66. Then a flop onto the reservoirs to the north.

I was about to start getting deparate, looking at some more south facing triggers to fly but heading in that direction put me in sight of a buzzard in a great climb. At this point it was nice to give some advice to Pennine fliers about the air ahead. John Murphy an co were over Tan Hill and wondering which direction to go in.

Things got really touch and go in Teesdale but as the ground rises the air triggers into great climbs both for Teesdale and Weardale. The strength of these climbs lets be catch up with Chris and Jake and in doing so, share thermals with more buzzards and the occasional sailplane. We saw some other inhabitants in the sky too… More on that if you buy me a pint; -) BTW Does it make sense to thermal in the same direction as a sailplane? The top of thermals were now reaching nearly 7 grand and it is ice cold up here. My hands had gone hours ago and I was regularly losing circulation with the pressure from holding the breaks in a wrap. The view of the Solway Firth on one side and the.

At this point the goal we set was in sight and I extend my glide in bouyant air over Hexham with Chris. We had to make a village to the north though and we were low and facing rising ground to the north. Time to be conservative. Especially so, since it was becoming obvious the sea air was in with whispy, poorly developed clouds replacing denser, deeper clouds. The climbs also were disorganised with some real bumps and bangs to be found. Holding onto what we could got us into goal and I was well pleased when the cylinder alarm sounded. My longest flight to goal at 102km. Now, to find lift out of here, head to the Cheviots and take the site record…

Nick Pain had in the meanwhile, managed to keep further inland, coming from Jenkin in the Lakes. It was better air further west and looked much easier going. I'd separated again by this point and was trying to work the radgy air as best I could. My last hope was going to be the edge of a forest with upland in sun upwind. Chris had climbed out of there earlier but it seemed I arrived out of cycle and I choose to land (was drawn to) a monument called Winter's Gibbet. A bit gruesome.

There was more than the odd visitor to it and I was able to bag a lift straight to Morpeth station and from there trains straight home for a picku pat Shipley station. The longest flights give the easiest retrieves. If a little steep on the train fair.

Try hard to stay with the gaggle, but when I can't keep them in sight as good indicators of where it's working. It helps to note the ground feature a glider is near when you're looking at it in the distance. Then when you glance back it's easy to find.

Fly cross wind for lots of reasons, better air, better airspace and more country to fly along. Just flying downwind today would have put us in sea breeze and airspace before Durham.

Work out how to fly in and around sea breeze air better.