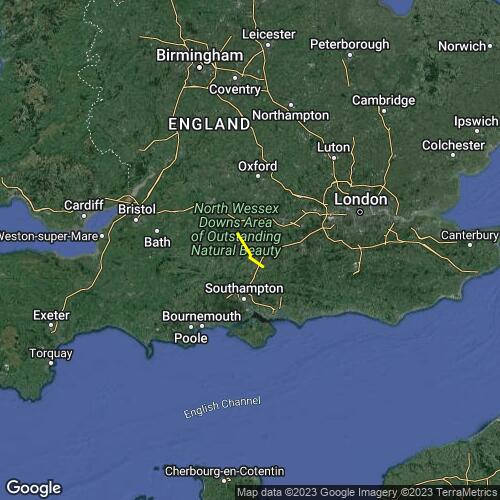 Made a flight plan to fly to Whitchurch or Micheldever in the morning as I needed to be back for a BBQ leaving at 6pm. So prepped and ready, I waited for the conditions to improve and base to rise which it did nicely by mid day. The direction of the wind was northerly so a bit a cross winding was going to be required.

Launched immediately into a nice thermal which I pushed out a bit to the front and took slowly over the back. Whilst turning I say Alan Birtles also climbing out just further behind the hill and eventually we joined up. We lost the initial climb at about 2,200ft and pushed along the ridge a bit to Malcolm on his HG. However I saw some birds low down start to turn and found a nice climb to continue. Over the back there were good clouds forming and we eventually pushed over to them for a 4m/s climb. The thermals were small, scrappy and very turbulent.

Pushing down to Andover we got some more climbs and progressively there were getting more turbulent and rough. We made it to Whitchurch and there was another scrappy climb we too some time to get back up from. Eventually I found a more sold core but pushing away from the cloud I encountered some more rough air and the wind collapsed on left tip which started to rotate, so corrected and got the cravat out and we carried on.

By this point it was so rough all my energy was being used up keeping the glider flying. We got to Popham and flew south of there but low and found some thermals to get over the M3 and for a bit longer, eventually choosing a big field to land in.

On the plus side we landed next to a brewery and enjoyed sampling their beer which resulted in a sale. Thanks to richard ford for retrieve in plenty time for bbq this evening result.