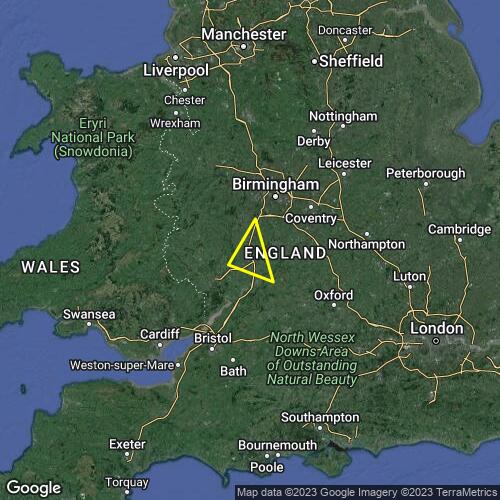 We'd planned to go to the Malverns but at 8 in the morning Graham Steel texted to ask if we wanted to tow with them… And did we have a spare launch marshall and tow bar! Luckily we did so we got to XCLent's field at about 10. It's set on really high ground in the Cotswolds, with little slopes running up to it on two sides, and it is a properly epic spot. Very generous to have the invite - its a small, members' club, and I guess needs to be, because you can only get so many people up on a winch, and for Graham to invite us was a very generous offer.

Roger Turner, Mark Watts, Wayne Seeley, Graham and I all got up and away within an hour, and then pushed west into wind towards the Malverns. Quickly the clouds dissipated and we were left with blue, grabby, lurchy conditions over the baked yellow fields below us. After two hours we made TP1, then turned slightly cross and down wind towards Bromsgrove. Combine harvesters were nicely spaced out, and apart from a few quickly forming and disappearing whispies, we just basically joined the dots between them.

Before TP 2, with the Birmingham city skyline now visible in the distance, Mark, Wayne and I joined up, and I thought, 'here we go, we're off'. Wayne and Mark are pretty quick, and they don't hang about for weak stuff. We cracked on, but conditions were getting weaker, and I sensed trouble brewing. On one glide down to about 3 grand, I connected with something slightly off track, called it out on the radio, but Mark was already quite committed and glided on hoping for more. Unfortunately he didn't connect with anything.

It was 5 pm and I was all on my lonesome, in a 0.5 m/s climb at 2500 ft, and I just thought, 'well what would Graham do? ' Just hang on in there. In the weak climbs, I kept looking at my Oudie's thermal tracker, gliding back upwind up the circles when it died off. There was a bit of a WSW cross/slight head wind, and I was dubious I'd make it, but kept knocking down the numbers on each glide. I had one deep long glide in 3 m/s sink to a fairly low save off some hay balers in a field, and then I was 13 km from goal.

I bumbled along the valley, getting slowly up to about 4500 ft, and then waited till I had a glide angle leaving 700 ft spare on arrival. I set off with about 8 km to go, arms in, trimming my ground speed with the speed bar to be as near to the glider's trim speed as possible for max glide. Russ Ogden taught Guy Anderson this trick when gliding into or cross-wind and if its good enough for them its good enough for me.

The flight was a team effort from start to finish, from Annie helping in the field, Howard towing, Graham lending us gear, and the flying itself of course. It had to be in the blue conditions, and Wayne and Mark were brilliant as usual in calling climbs. This only just beats Graham's 120 km mark of last week, so I'm sure he or someone else will have it back next week. Or did we sabotage their winch when we left? Muhahahaha…