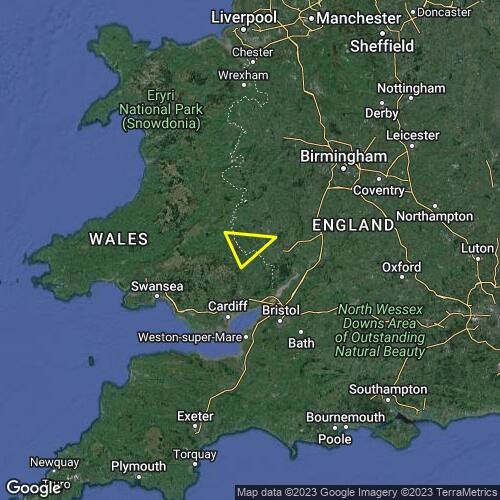 I was a bit too worried about bombing out from take off which meant all the others who were trying the same route had already started the first leg while I was still sat on the hill. When I did eventually launch, I didn't find my first climb until I was 900 foot below take off! Luckily there were quite a few others who launched at the same time (or slightly before with a bit of encouragement from me) which helped, I'd have landed before it had even begun if it wasn't for them showing me the climbs!

That left me on my own for almost the whole flight! There was lots of sink heading towards the Sugar Loaf but after that the first leg through the mountains was relatively straight forward. I knew I had to fly fast to make it around the course in time and I thought I was making good time. Until I saw Ken, who launched at the same time as me, pass over my head in orbit on his EN-B as I was getting a climb fairly low on the hills behind the Sugar Loaf.

Things slowed down in the flats before TP1 but a 6m/s climb near Hay-on-Wye up to 6000ft gave me a comfortable glide into the English flats, just before things started getting tricky. Despite it being a very light wind day, all of the thermals felt very broken and I didn't manage to get back to cloudbase for the rest of the day.

I drifted in and out of TP2 barely able to maintain 2000ft, any bit of lift I could find was very short-lived. I was low and the terrain didn't offer anything obvious to aim for, I was starting to get a worried. I caught a bird in the corner of my eye, upwind but just within reach, it had to work and thankfully it did! It took me to around 5000ft but it was looking very blue towards goal. Garway and the Skirrid were both on course line but Garway was a marginal glide in a cross wind from where I was and I'd need a good climb once I got there to connect with the Skirrid. A couple of small bubbles stretched my glide to reach Garway where I topped up as much as I could then headed off towards Luke and Lawrie who I could now see thermalling low near the Skirrid.

I arrived 100ft below them and just above the summit but still about 2km from the hill. They were barely going up, I wasn't, a few more turns and I'd be picking a landing field so I dived for the into wind north face. 3m/s of sink put me level with the very base of the north face, still too far away to reach it, I thought it was all over. But nature rescued me again! I spotted another bird, this time it wasn't circling, just flying straight, but it wasn't going down, it was my only chance. 0 turned into 0.5 into 1 into 2m/s. Luke and Lawrie soon joined me and a few minutes later we were top landing back on the Blorenge to retrieve our cars!

I had added 10k on to my PB triangle distance two days in a row and I think this one was a British speed record for 100k! Not a bad weekend!