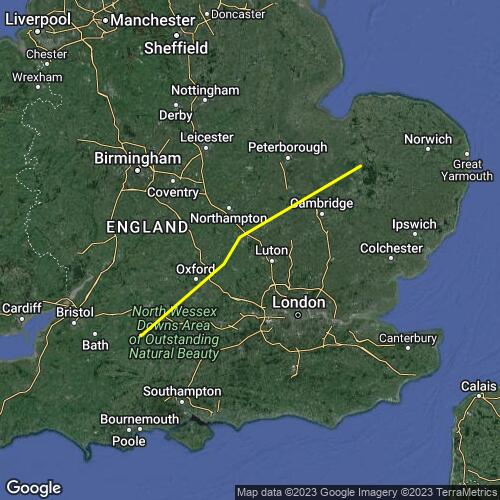 The forecast definitely looked like 'one of those days'. It had the potential to be absolutely epic. Milk Hill was looking crowded by 9:00 and pretty soon Milk Spur was full of the XC crowd too. Luke Nicol was first to launch and try the air and as he contacted a thermal out in front of the spur I decided that it was time for me too. After a couple of beats and circles with Luke and Mike Manners I saw some buzzards to the south and decided to push out. With the wind fairly strong I committed early and after re-centring on another buzzard was rewarded with a smooth, solid climb that built to 4m/s all the way to 3600 ft.

I'd climbed out on my own but with a cloudstreet that looked like it stretched on to Didcot I pushed out, I was sure I'd be seeing the Zenos soon enough anyway. I decided to take it slow till the day got going, it was still only 10:45 but I knew I had to make some crosswind to make it past Cranfield. The sky looked lovely all the way past Oxford but then the story of the day really started to show. There were large areas of spreadout in places and big blue holes too. It was a tactical game to look out at the ground for the next 20-40 km and see where the amount of shadow and sun looked about right and step left or right in order to fly through the right airmass. I stepped left at Oxford and again at Buckingham, and got low a few times. It was a real relief to get far enough North to pass Milton Keynes in a climb and cruise over the edge of the Cranfield zone near cloudbase. The airspace opens up to FL75 or higher to the East of Cranfield so I could make use of cloudbase which went up to 5400 ft at times.

I could hear Luke and Kirsty nearby on the radio but didn't see them until I was over Ely and they arrived slightly to the North of me. It turns out that they the final bit of routing right in the end, tracking up the twin canals past Marham and on to the coast. I had a lovely climb to 5400 ft West of Ely and then another small one to 4400 ft just to the East which petered out to nothing (I think there was a shear layer at around that height). I saw a nice cu building on track but it was just too far away.

The Cure did a sterling job and I made 17 km in that final glide but there was nothing but sink all the way to the ground and I was still a few km short of the cloud. Turning into wind to land I realised exactly why I'd been making such good time! I didn't need any bar to land but I certainly wasn't going forwards at any great rate, maybe even slightly backwards if I'm honest. Landing at 3:30 does have its benefits so a quick hitch to the station and a train to London saw me back at the hill for 9:30 and home for 10.

Happy days, and well done to those guys who made the coast at Cromer.