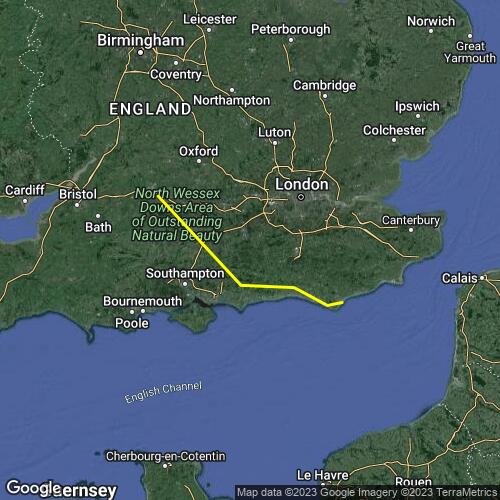 My car was booked to be worked on for 5 hours in Havant and I had no way of getting flying. I checked my wing in the car just in case. How lucky I did! Al Jones could pick me up from Petersfield if I could get the train and be there by 10.

We arrived at a pretty windy Liddington. Tom Cole was up and the direction looked spot on.

For Liddington the climb out was quite positive. Everyone left ahead of me and I was left enjoying the sky by myself. The climbs were very easy to find in this first section. It seemed to be mainly cloud, but by keeping on downwind it was easy to stay high.

Between Popham and Four Marks this all changed and Ken Wilkinson and I were struggling relatively low down quite a while.

My declared goal was Petersfield and this came up very quickly so I continued towards Harting. The airspace drops just past three so I turned south towards Chichester so I could make full use of the now 5000+ base.

Along the South coast the streets continued way out to sea. The wind was still NW at about 24km. The only way on was to take a climb, then full bar across to the next street, take a climb and do on all the way to the Dyke.

I was catching two wings approaching the Dyke and they seemed to land around there. I was going to end my flight there too, but there was an Atos gliding on the hill, so I joined him for about 10 minutes. Just as I was thinking about landing, a very strong thermal came through and shot me off the back of the hill in quite dramatic fashion. Two hangie joined me for a while.

From there I flew on down the coast. The clouds were working a treat, the climbs were strong and any time I was remotely low the seagulls came to my rescue.

I thought I was landing at Newhaven. My first 150km of the year. I followed some seagulls over the town and to my great surprise this released into a strong climb, though no cloud above.

I started to get very excited about the two goals I have been working on. The first fell near Newhaven. 5 hours in the air.

The second meant me flying past Eastbourne station to make sure I bagged the 100 miles straight distance.

The clouds were still streeting and working well, but I ran out of land. Next time from Selsley!