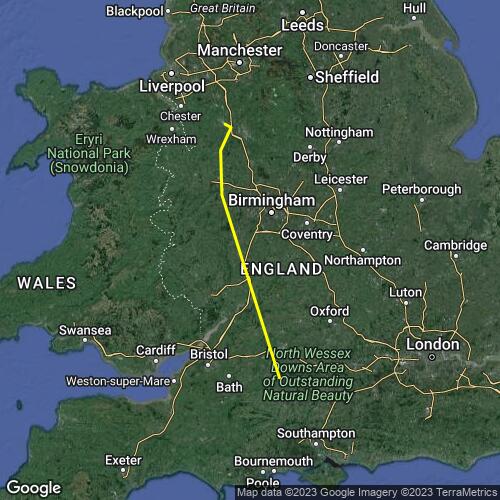 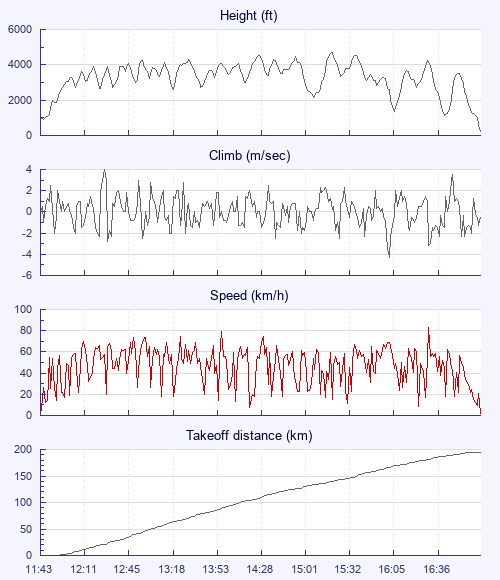 We arrived slightly late, just after 11 as I had to work first thing, to see the first wings leaving at base. As we got to launch another big gaggle went over the back. Graham was worried we had arrived too late, but I joked it'd be fine as we would have markers downwind! Pretty soon we climbed out in an ok climb to base just above 3500ft. The next best cloud was slightly crosswind to the west but was the only clear option and worked well. As we climbed to base I spotted someone climbing over Wootton Bassett, so raced over to him and climbed back to base. As we did that I spotted some Zenos climbing downwind so off we went to them. This pattern continued all the way to near Leckhampton (50km). The early leavers had split and seemed to confirm that all the clouds were working even though by now it had started to overdevelop with lots of cloud and big shadows.

As we approached the Cotswold edge Graham Richards pushed along it to the best looking cloud, but I couldn't see what our next move would be if it worked, and with goal being west of our track I decided to push out over the racecourse at Cheltenham instead. This turned out to be a good move and soon Gray and I were at base. The wind was now due south and with goal being off to the west it was time to start flying crosswind, so every chance we got we pushed west. The next 60km was pretty straightforward and we cruised along at base from Cheltenham to Kidderminster, where finally the sky started to improve, but with about 35k to goal we had some big jumps crosswind to avoid airspace and stay on track to goal as the wind now seemed SSW. This was the hardest point and we got down to around 2000ft for the first time in the flight. After some grovelling we eventually got back to base. I was pretty confident we would now make the glide into our goal, but the sky downwind looked nice, and even though my radio had gone flat at 50k, I knew Gray would want to keep going, so another slight crosswind glide set us up perfectly upwind of goal at base (4500ft)

We glided through goal at about 4000ft heading towards a nice cloud, and clear of airspace we could finally fly downwind again. I'd been pushing pretty hard for almost 4 hrs to hit goal and stupidly switched off on the glide and flew through the scrappy climb that Graham stopped in, sure that the core was downwind. It wasn't and I was soon down to about 1000ft pretty annoyed that having spent ages fighting crosswind to make carrying on easier, I'd pretty much flown myself into the ground! Luckily as I headed off to a village to land I hit a screamer and, as soon as I was established, Graham came racing back over and we were up at base and off again.

We knew airspace was going to end the flight soon and unfortunately we didn't know for sure if 200km was on. So after a bit of shouting in the last climb that neither of us understood, we changed course and headed towards Crewe knowing there was a train home. As we glided in I was still trying to work out if 200k was possible, so I logged on to Livetrack24 only to see we were already at 194k and had we turned earlier and ran downwind under the airspace we would have made it, but hey ho we were too low now and with a good breeze there was no chance either of us were willing to push on low over Crewe, so Graham picked us a nice field and down we went.

In the meantime Tosh had pulled up next to our landing field, having been working in the area and following us on Livetrack24, and offered a lift to the station. Perfect, cheers bud. As we packed away we watched Rich Osborne fly over and land at the train station. We grabbed a beer, jumped on a train and were home by 9pm - result!