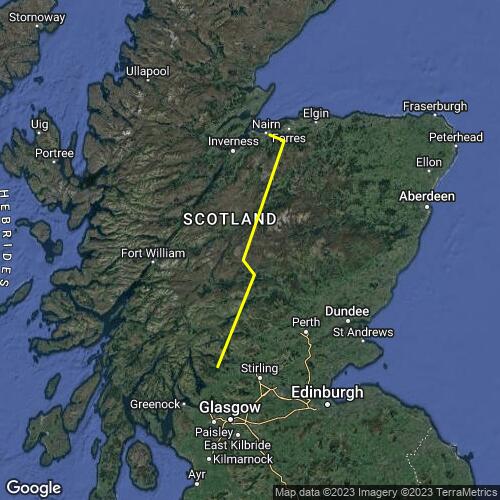 I set off from home with my trusty Cayenne 5 for one last flight before it was sold - the guy hadn't paid me for it yet so that seemed sort of ok to me! Imagine my dilemma when on route to Bob G's I got a text saying that payment has been sent and could I post the glider today - too late to turn around to get my Chili4 I rang Bob to see if I could borrow his old Trango XC3. Luckily for me Trias had turned down the chance to fly it so I was sorted - phew.

I arrived at Bob's and transferred my kit, packaging my old glider for posting before taking it to the post office - it was a bit frantic but I was relieved it was done - I hate goodbyes.

It was now too late to make Balquhidder so a quick call to Tony to say we would try and get there from Aberfolye. We get a Call from Alastair T and meet him before heading up the hill - giving me time to buy a fleece as I'd left my jacket at home!

On launch there is no messing around and unusually I'm the last off - Trias, Bob and Alastair are all climbing by the time I get the Trango into the air. I launch straight into the bottom of their climb. Trias had already gone and Bob was topping out at base as I climbed past Alastair who had pushed forward and fallen out the front of the climb.

I topped out (after making hard work of it on an unfamiliar glider) Bob had taken an odd line - not the route to Ben Ledi that he had shown me a few weeks earlier and where Trias was now scratching.

I push onto Ben Ledi and found lift - Trias pushes out low and found a climb and Bob came back to join him. I waited but they both glided off north!

Luckliy the wind was still quite light and I dove over the ridge into Strahyre and started to climb in the lee. At this point Trias also appears from over the ridge having doubled back - there was but no sign of Bob.

We headed towards Balquhidder where there was a great display of gliders laid out on the hill with a few in the air on the ridge behind. I could see Bob scurry down a side valley very low and start to turn.

Trias pushed on below me on bar towards Lochearnhead and I see him take a hit before pinging up - I have a little chuckle - he's not lost it!

As is often the way I climbed badly, distracted by Trias above me. I pushed onto Lochearnhead and scratched for a bit until a cycle came through and I could climb again - I see Martin Hogg on his custom colour Mentor.

When I eventually get up, after what seemed an age, I see gliders towards in Glen Ochay - I don't go that way.

My clouds take me over Loch Tay and onto Ben Lawers and I stay on the South side and track along the range. I pass the point where I landed a few weeks earlier so I know I've done 50km and I'm sort of happy.

I see Adrian low on the tree lined ridge near the mouth of Glen Lyons - he is scratching well but I lose him as I climb and don't know if he has pinged up or has pushed on low - I sort of know he will get out of there.

As I top out and head towards Schiehallion I see a glider come over a peak on the Lawers and head towards me, I can't make out the colour on the glider but the style tells me its Bob G - I shout come on Bob but see him low in the hole.

I don't see another glider until I'm near Tummel Bridge when a red glider comes off Rannoch More and glides low towards the relative safety of the A9 (Fred Robinson? ) - he looks like he's down?

I'm high and thinking about routes - I've not declared a goal and there is no one ahead that I can see - I'm not on radio so it's just me. I suck in an energy gel and push north staying with the A9 for now.

A sailplane cruises past and we wave - funny old game this flying.

As I line up with a big valley with two lochs in it I see the line I want and glide off down wind. Its stunningly beautiful but I know I can't afford to get low in here as the wind is fresh and I fear the thermals may be broken.

Its committed but is my first real crossing - it's been low stress until this point and I'm feeling fresh if slightly chilly in my new fleece. I'm finding climbing a bit hard on the Trango (note to self eat less pies)

I find lift and drift with it, I'm staying high-ish but don't have an escape glide yet. I'm turning in the climb and looking at the deep green water of the loch and starting to smile as my height gives me an escape - no paddling today.

I see a black and white Zeno come screaming towards me low on the hills - it looks windy down there and I see and Tony come over into the lee and start to climb - a brave move that pays off.

I push on and at the top of the next climb I see Tony getting high and another glider further west over the A9 also climbing (Tim Jackson? )

I'm not racing and a bit further on towards Aviemore Tony comes in low beneath me - he is low and struggling and I stay with him willing him up.

Tony eventually lands and I can feel the ground suck calling me as well - I half think about an Ice cream and a beer in Aviemore but quickly slap myself - I tell myself that Brendan wouldn't land until the day was finished and it was only 5 o'clock. I could see convergence ahead and if I could just get back to the clouds I'd be back in the game! I push on and get the best climb of the day back to 6300 feet - what a beauty!

I can see an inviting road ahead and track across to it trying to read the lie of the land and picking out potential landing options but I'm not landing yet and get another climb I can see the coast and start to relax.

Its lifty and I'm making good speed one more climb and I know this is my last glide.

I look down and realise the wind mills I'd been flying towards are actually are facing the opposite direction - the sea breeze is hoofing in below me!

I eventually drop through some bumpy shear and my ground speed starts to drop I'm not really sure how far I've flown but can see its almost 6 hours in the air and I know the last hour has been fast. I dog leg more cross wind and then down wind and start to worry about whether I will need to land backwards - I give myself plenty of room just in case but needn't have worried too much as I touch down nicely. I check my instruments - 160km straight line - 173km with turn points - I'm happy. I had no idea this was a new Scottish record but I knew Brendan would have been proud - this one is for you Brendan get well soon mate!