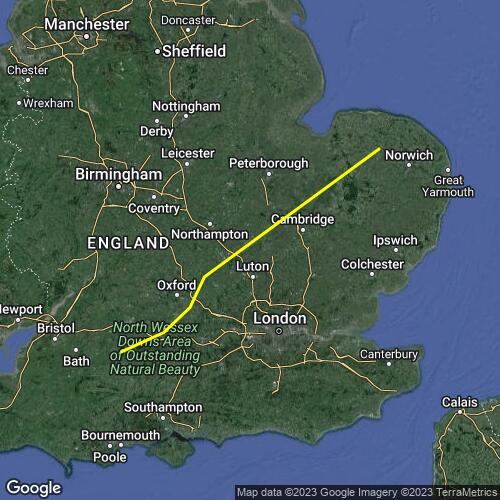 The Lasham forecast was pretty much spot on for the day but I'd like to write up my take on it all as I know a lot of pilots, including myself, are cautious about flying on days like that.

The first hazard was the wind… I really don't like too much wind, and when we arrived I wasn't sure if I would fly, but as the mixing started it became more comfortable and it was easy to push forward on the hill, hands-up. At times it dropped to the point we couldn't ridge soar, but once we were up at base there was obviously a very good drift.

Luke, Jim and Joe got away early then a big gaggle of us left at around noon. I ended up plugging on with Mark Watts, Guy Anderson and Harry Bloxham and we worked really well as a team doing the necessary cross winding to get around airspace… It would have been much much harder on your own.

Apart from the wind, my other concern was overdevelopment. We had a lucky route though… All the cloud tops in our area were around 6 - 8 K, and bizarrely most of the big good looking clouds weren't working - most of our climbs were under developing wispy bits rather than the established clouds.

I know some friends saw some pretty heavy downpours further south in the country, but I only saw two showers all day. The first was 30 km ahead of us near Milton Keynes and we pushed well north of that. I wasn't too concerned as the cloud was much, much wider than it was tall, indicating that dry air above the cloud was capping it, as Lasham predicted.

The second shower was to our left over Swaffham as we got close to our set goal (237 km). It was a little too close to our course line for comfort. It started spitting and coming across at us more than I expected so we had to abandon ship and run from that one. I probably should have treated if with even more caution… If I'm honest I probably got a bit goal-sucked.

Anyhow a great day out, and many many thanks to Carl Foster for scooping me and Mark up (we landed near the Norfolk tow field) and getting us to a station - really appreciated!

Synopsis: An occlusion through overnight, well clear of us by 6am (? ) and clearing the east coast by about midday. The hint of a ridge of high pressure and a fairly nice looking airmass, though it could be a bit showery.

Most places should enjoy something like that - strong thermals under towering cumulus base 3000-3500ft+ with the best bits being near the south coast, E. Anglia (later on) and S. Wales (later on). The towering cumulus goes into mostly dry air so I am not that worried about overdevelopment or isolated showers…

… BUT The BBC is talking about a strip of showers running from Devon (or the Bristol channel) downwind in the afternoon and the soundings show an area like that which will overdevelop and probably shower. Guessing it is either the convergence from the west country OR from the Bristol Channel - sorry - not sure. It will be significant for us either because it's a motorway or lots of showers that stop us getting home! I can see the soundings are good most other places, but this bit is awkward weather-wise and task-wise.

With the wind and the shower risk and this risk-of-a-line-of-showers I'd still say it is probably a 300-500k day. It is fairly easy to envisage a 500k. But can't help thinking if its streets and you use the good bits and avoid the bad bits it could be a 600km+?