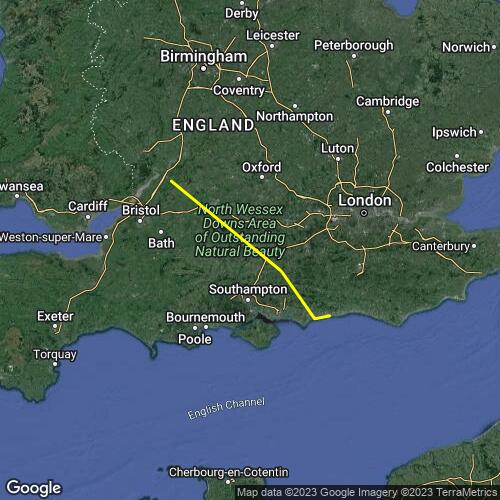 Well, this has been a learning experience in XC League declarations but I'll come to that in a minute.

What an amazing day out this was. I launched fairly early but didn't get away in the first few cycles and then the breeze died so I landed for a bite to eat.

Second go was around midday and I joined a group of about 6 or 8 who climbed out in a few m/s. I got a little separated from the group but saw a few (mostly above me) over the next few hours. The best climb of the day was before Lyneham which peaked over 5 m/s on the averager.

The next few km was a bit of a low struggle and I even turned back once to join someone in a climb. After Marlborough though it was pretty classic climb & glide with sailplanes and birds. I'd seen Dickon Walker pass by nice and high earlier on his Iota and I saw him again near Petersfield cruising under a street to my right. I tagged my a goal TP at 108 km and chased after him. We ended up in the same thermal at Bognor and he pressed on while I spiralled down for an ice cream at Littlehampton.

I achieved 2 of my a paragliding aims, first 100 km and landing on the beach, next to some surprised sunbathers. The view of the Solent to the right and the coast stretching out to the left was truly magnificent.

Anyway, back to declarations. It turns out that I don't know my Flymaster as well as I thought. I put my goal as a goto in order to help with my nav and to make sure I tagged it, but that popped a log on the igc file which didn't have a start point and this took precedence over my text, so no claim. A real lesson learned but not too much lost in the big scheme of things.

My most fun and satisfying paragliding day out… So far.