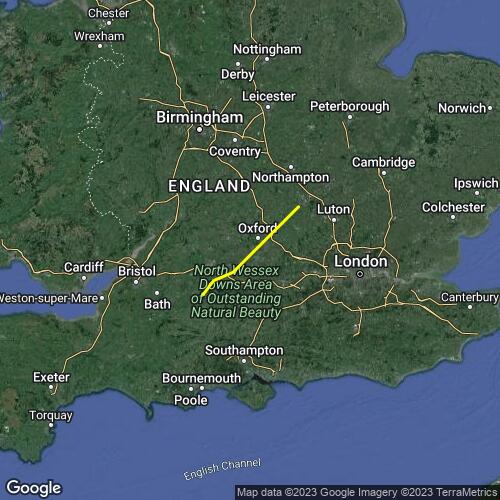 My second best UK flight to date yet somehow frustrating having started at GB but been unable to get away and then the wind veered to the west with only a handful having climbed out. Walked to Milk as a big gaggle departed - more frustration - then spent a long time in light winds with the occasional pilot zipping away - one in a thermal that was no more than 100 feet above me but just left before I got there. And so on for more than an hour as regular lulls kept putting us all back on the ground. Finally a gaggle climbed out on the spur but late in the afternoon - so frustrating on what was a classic day. Most held back and took a second climb over the ridge and got good height before taking a slightly more northerly while I struck out with a couple of others NW but was soon alone in quite moderate and broken thermals so not the 5kts of lift Lasham had forecast. It felt like the flight never really got going and I never could get high with cloudbase well above, until finally approaching Abingdon where I saw a gull screaming up - though even that moderated to about 1.5 up by the time I muscled in on his lift. But it drifted nicely on over the southern edge of Oxford and then climbed solidly all the way to base at 6500 - the first and last time I touched the clouds. By now it was getting quite late and cloud cover was 7/8 so could only find one more climb before touching down just short of Milton Keynes. It's impressive how far our sport has advanced that a 100km flight (well almost - 120m short of the ton was, let's just say, frustrating) on a weekday isn't enough to make it into the top ten for the day. Well done to those who flew some stupendous distances on up into Lincolnshire showing what was possible for the conditions.