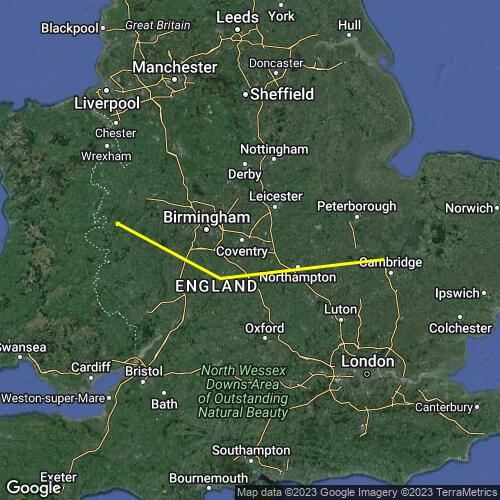 I had a poker game planned for Wednesday night so had decided I'd stay local until I saw Nev's post about a lift to the Mynd. As I set my alarm for 5am I was rather regretting my decision but Nev's great company and trying to keep up with hangies is always good fun.

We arrived about 10 and it looked windy with just one guy on a speedwing and half a dozen hang gliders getting ready. The sky showed a bit of wave and the base looked ragged as it whistled by. So no time like the present I got shit together set a goal at 270km and launched. I was a bit surprised to penetrate easily without bar and was soon joined by Luke on his Moyes. I got to base first, and while it was only 3k ft, I thought it should be enough to clear the rotor. Luke waited for his mate so I headed on alone until eventually finding the bounce (where the falling air has to go back up)about 5km behind the hill. Drifting with this I took a decent lee sider behind the next hill and then started to desperately crosswind thinking I'd left it too late to avoid Birmingham.

The wind was blowing at around 25km, wsw low down but wnw high up so the less time spent low the easier the cross winding became. After sneaking round the corner of Birmingham class A I then had to crosswind the other way to get back on track for Fakenham. The sky however looked very overcast further north and so I decided to abandon the goal and just headed off down wind for the last 50km using the rape fields and lakes which had worked well all day.

Plenty more land left, so surely with a little less wind, a bigger base and another hour in the day somebody will do 300km from the Mynd… Could be you!