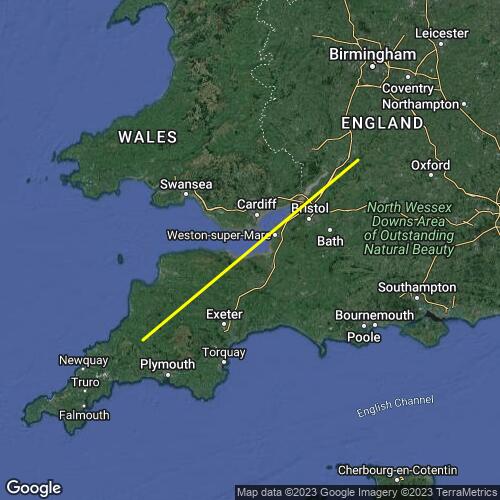 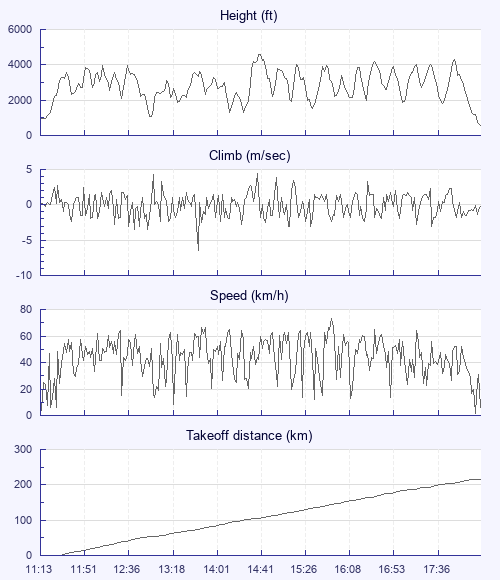 A fair old crew assembled at Leckhampton yesterday. I came up with Eddie and Adam from Somerset and as we were buying sandwiches in Cheltenham I looked up to see rather shredded looking cu scudding along in a stiff breeze way off to the east. I was quietly embarrassed to have lured these good folk to the wrong hill but as ever Adam was upbeat and said we should just have a look anyway.

Sure enough the wind was on the hill. It swirls up the bowl nicely and is quite forgiving if the forecast is not perfect. With a good rasp and Lasham forecast we set an ambitious goal of a golf course just east of Launceston in Corwall, 214km straightline and a new uk goal record to boot. So off we all hopped, Mark, Adam, Kirsty and I took a reasonable climb away but in rather choppy conditions Kirsty and Adam were soon desperately low. Mark was styling along in his usual balls out manner so he and I raced down to Bath in pretty short order, the drift just about perfect.

If the Bath Gap wasn't marked on the airspace map we would probably have sailed straight through. It has a ceiling of 4500ft (thanks Tim Pentreath) which is plenty, but as it is a bit narrow I tried to position myself on the upwind margin for safety. This turned out to be a big mistake as I fell into a deep hole while Mark climbed nicely way off to my right. Thankfully Bath also has a nice deep valley, otherwise I'd have been on the ground, but the town does work and I slowly crawled out of my hole.

Kirsty had not only squeaked out from low but also overtook us at Bath drifting straight through at 4k ft. She and Mark pushed on as for the next half hour I struggled to find anything more than a half up. By the time I reached Glastonbury they were out of site and I resigned myself to a slower afternoon on my own. The birds were everywhere and I had to yell at a pair of Buzzard over Somerton who mobbed me, claws out while guiding me into the first decent 3m thermal on the Somerset levels. As Taunton approached I spotted a spec in the distance, which turned out to be Kirsty, and with conditions full on I switched up a gear to catch her.

Kirsty saw me coming and kindly slowed down enough for me to join her just past Tiverton. We still had over 60km to goal and while the air was buoyant I thought our chances of making it were nil. We passed north of Dartmoor, majestic in the evening sun and in the distance we could see the sea breeze front exactly where RASp had said it would be, arching in from the south coast and now effectively blocking our path towards any more fun. Still we pushed on taking climbs from nowhere, each time thinking this one must be the last.

Just as we reached the front we took the sweetest 2m climb straight up to base and then beyond it, 500ft up the side of the cloud. At 4200ft I sneaked around the cloud and got ready for a bit of a pasting on a final glide right through the front itself, the 18th hole now clearly in view. The air turned out to be super smooth but ground speed dropped to 20kph and we needed a fair dollop of bar to sneak home with just 200ft to spare.

Great to fly with Kirsty on her beautiful Enzo 2, she just makes it all look so effortless. What a week, these modern gliders are re-writing what is possible in the UK, all we need is a bit more land! See you all on a hill soon.