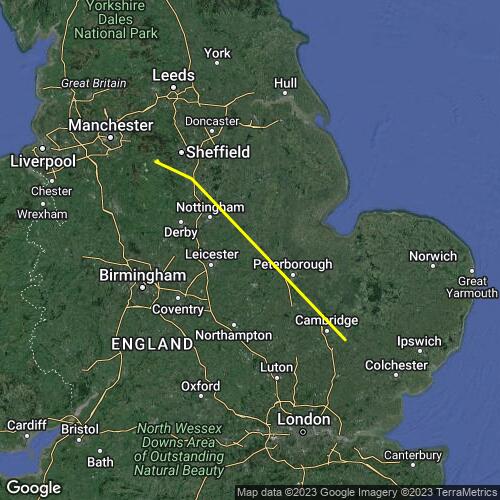 Rasp led us up the garden path on Thursday so 5 of us ended up staying in Birmingham before ditching the plan to go to Llangollen and heading for Bradwell instead. I nearly took out Nige Prior on launch getting picked up and dragged over his lines and dumped twice before getting off ("fuckin southern showboatin", he drawled) then we were off: Zingy epicness over the peaks, a bit slower beyond.

I was flying with Mark Watts and it was exactly as Rasp predicted really, 4500 ft - 5000 ft base and 3-4 up climbs. Mark landed after we both made a stupid mistake and did a silly long glide about 70-80 k out, and I was lucky to just squeek away in a zero. The yellow rape fields were definitely working well today when low.

We'd declared a goal at Peterborough to give us something to aim for as Rasp was predicting spreadout and general poor conditions south of there. Andy Walls landed at goal, and although the clouds were all bigger and more inert looking further on, actually there was a nice street so I decided to push on in what turned out to be the best section of the day before taking a couple of mincey slow climbs at the end to get past Cambridge.

Today just proved to me how you really have to keep it lastminute. Com as the forecasts changed massively just the evening before. Thanks Ellis, Mark, Rog and Kenny for a great trip and thanks Guy for all the weather updates. Oh and Jimmy Piper beat us on the tour-of-Britain award: Norfolk-Dunstable-Westbury-Llangollen-Bradwell in under 3 days!

What else - oh yes - on the way back Kenny explained to me what 'cold air advection' is - apparently its the warmer air above the clouds sucking up the air into the clouds, so you get longer liftier lines right under base when that's happening, which it seemed to be doing later today. Lasham had been forecasting that to be happening, and so it was interesting to be told what that was about.