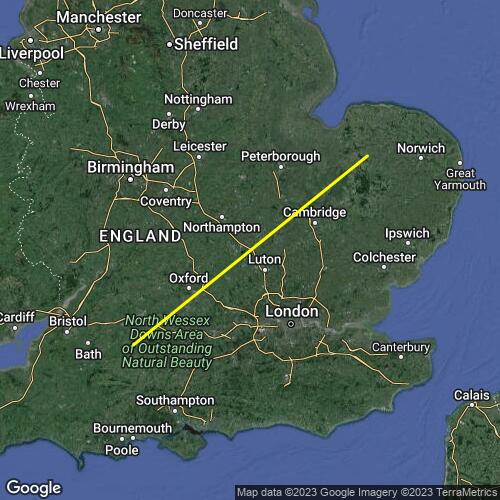 Ridiculously epic. Guy Anderson, stranded in rainy Serbia, had posted on Telegram that Sunday had 'record written all over it'. Despite the forecast gale, a Northern crew has headed down and they find Rich Osborne, Annee, Andrew Craig and me drinking tea at the Milk top car park. Doubts are expressed to them, on the basis that it's howling; then Kirsty's Enzo 2 pops up on the front spur and makes surprisingly rapid progress into wind. Right, off we go. Wagga leads the way as usual with Kirsty, Hugh, and Barney testing the air.

Everyone seems to be climbing out convincingly within 10 minutes, and after a short and tippy first flight I get away around midday under a large cloud with Cav, who gradually leaves me behind. The 30km/h wind at flying height quickly spreads everyone out downwind and I never see another glider. Instead of trying to catch up I focus on keeping high, which isn't too difficult under a big street which seems to stretch from the hill over Didcot to the horizon. The Carrera is helping a lot - such a sweet glider. In old money, it talks to you like a DHV2/3, handles like a DHV2 and has passive safety like a DHV1/2. And it outclimbs and even outglides the comp wings that were around when I started flying. We're so lucky to be able to fly these awesome current designs. But I digress.

Base is at 4K and doesn't rise much for another hour. Cloud climbs are readily available but with a 5500 ceiling they're not to be trusted. The street I'm under has mushroomed out quite a way on both sides, shading out large areas, so I concentrate on staying under the darkest bits and find moderate lift. Arriving towards Milton Keynes and getting low, a gentle climb turns up and gets better as it drifts over the town, giving me enough height to make a break south to avoid Cranfield ATZ, which had done for Kirsty an hour earlier. This is the windiest part of the flight, probably 33km/hr at height, but while sinking out on the crosswind glide a bubble of light lift appears which drifts me over the edge of the ATZ. After this there's a clear track through the airspace, and I go back into survival mode, still unable to get as much ground clearance as I'd like.

A low glide over Bedford pays off with a ratty climb; but all too soon, low again towards St Neots. Struggling to work a broken thermal, I take a punt off sideways towards a tractor with an angled column of dust coming straight off it. Intercepting it at 750ft AGL, sure enough it's a climb. And not even that rough a climb. It turns into a 4.5m/s moonbeam to 6500ft, way higher than any previous part of the flight, and suddenly everything starts to look rather different. Clouds are well-spaced, large, juicy and rising to 7000ft - and, with totally flat sea-level terrain, there's a sense of infinite space all around that I've never had in the UK before. Suddenly goal is only 50k away and looks on.

Onwards over the bizarre Ouse Washes, a ruler-straight ribbon of wetland bordered by drainage rivers and stretching like a huge green runway off into the distance. The Wash glints in the sun, and offshore to the north is a gigantic windfarm spinning heartily. It all feels rather surreal, and watching 200km tick over on the GPS doesn't help. The drift isn't straight towards goal, and a series of semi-crosswind glides gets me in position to mince over Swaffham, where I'd declared 225km, at about 5.30pm. It turns out that Mark had declared the same town, but the other side of it - so we get one record each.

No way I'm landing at goal - 250km seems on with just a decent final glide. Getting low around 6, I find a somehow-convincing zero high enough to work, and it gradually turns into a smooth half-up to 5K. Gliding crosswind to keep a buffer distance from the coast, with unrealistic thoughts of getting blown out to sea preying on my mind, I don't optimize the final glide and end up a few km short of Cromer, and of Mark's newly-minted record distance set 90 minutes earlier. Turning into wind in the evening sun over a scenic manor house, I pick a stubble field from a dozen huge flat options with no upwind obstructions, and land in dead smooth air with plenty of forward speed. Lift to Cromer from a nice lady, sunset on the train home, stuff of dreams.