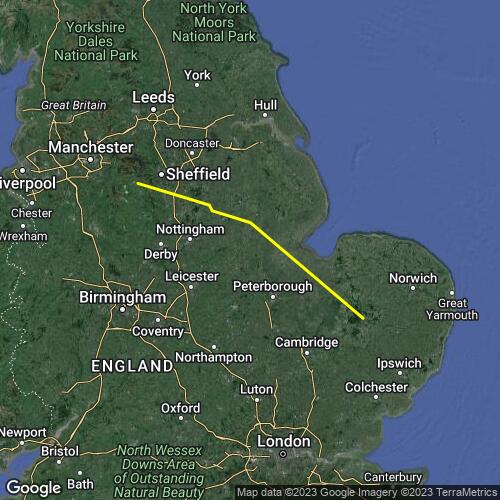 I was in Sheffield visiting my brother and family and base started to lift so he gave me a lift out to Bradwell. It wasn't very inspiring but Rasp looked great beyond the peaks. Took off in a lull (well, waited for HH Tsai to launch first, I'm a coward) and used some of the cloud suck to carry me up and out of the peaks, then took a long glide to get lowish over Chesterfield, and had to sit it out in weak zeros for a while waiting for the 8/8ths overcast to break up.

50 ks on it was a different story, the stratus broke up, the sun hit the ground and there were strong climbs all the way. It felt just like a cold front had just gone through, really unstable air and 'marge simpson' clouds which looked a bit too big, but even right under the darkest bases were totally managable.

It was amazing flying right past the Wash - it looked like the Amazon delta, not that I've been there - and it felt nuts that I was seeing it, having flown over the Severn at the other end of the country a few weeks back. Base rose to about 6200 ft and near the end I climbed up the side of a cloud for some extra safety for the final push.

I'd declared a 195 goal so had to crosswind quite hard to get near it. The final glide was a sweat - I set off 13 km and 4000 ft, and hit surprisingly strong sink. Maths was never my strong point and I had no glide calculators set up, but I made it with 100 ft.

To prove maths isn't my strong point I'd also ballsed up the start cylinder. When you declare a flight you have to give a start lat/long and a finish. My eventual track was 200 m wide of my start cylinder - I just hadn't zoomed in properly on Bradwell on XCPlanner when planning the flight. So, that cost me the valuable 'multiplier' that gives declared flights such big points in the league. When I realised I wondered if I should be annoyed but it was such an amazing day out, I couldn't really be. The bonus was I'd left my car at Sharpenhoe from Thursday's flight so that was on the way home making for a fairly quick trip back.