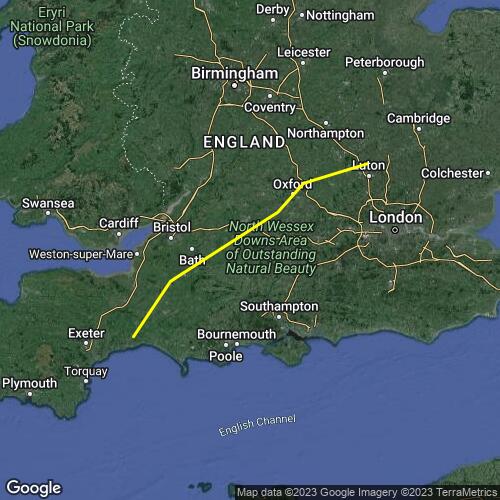 It looked very stable on the drive up with Mark and Carlo, and we spent about an hour plugging in all the Notams - Red Arrows and parachute jumping zones - with Carlo speaking to some very nice air traffic controllers who told us most of them weren't active for much of the day anyhow. Worth doing.

Then suddenly at 11:30, as we arrived, the cu's started popping and growing big time. Adrian Thomas, Al Wilson, Guy A and Helen Gant had all travelled to the pimple for the day, and Mark, Helen and I went over the back first, led by Helen's early commitment to a 2 up - thanks Helen.

The first 2 hours were just bonkers, solid 500-600 ft/min climbs under meaty looking clouds that looked like they could have you for lunch. I'd set a goal, and had authoritively shouted out the co-ords to everyone on take-off, but in the air the arrow was pointing way off to the right - whoops, I'd set us off on a mission to a valley in South Wales. Sorry everyone. Mark and I kept shouting at each other but I couldn't work out what he was saying, and then he sent me a text (no idea how in those conditions) saying 'goal? ' Ooops. Anyhow the NE wind was too strong to crosswind that much so we skirted the corner of Brize airspace at Oxford and carried on. Guy caught us up around here, and we zoomed over Uffington and on, combine harvesters pumping out the thermals like clockwork.

The day then changed massively, with the clouds shallowing out, the climbs weakening, and then after Frome it all went blue. Guy pushed on and Mark and I slowed up, taking our last climb to the top. We then bimbled down across the blue until milky cu's started appearing again. We glided low over Glastonbury's pyramid stage and I relied on Mark to sniff out our low save, a mix of sheep shit and smoke by the smell of it, to get us back in the game. Or maybe it was the ley lines?

As we headed south west the sea air seemed to come in from everywhere, and some heavy looking lumpy clouds hung around the south coast. We connected, got a bit of lift, but the air didn't feel like it really wanted to go up at 6 pm, more that it was just being jostled about in the sea breeze convergence, so we crossed through it and glided south into wind to Axminster train station for a fast train back home. What a day.