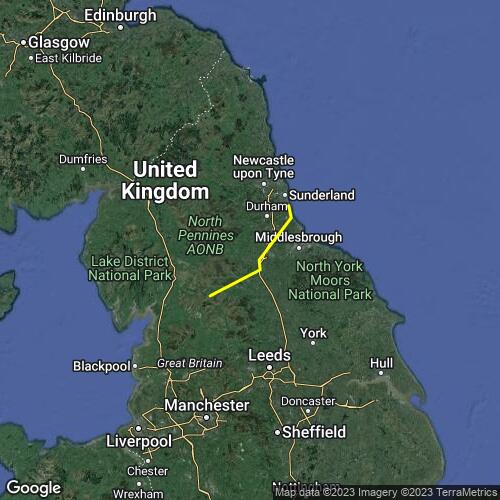 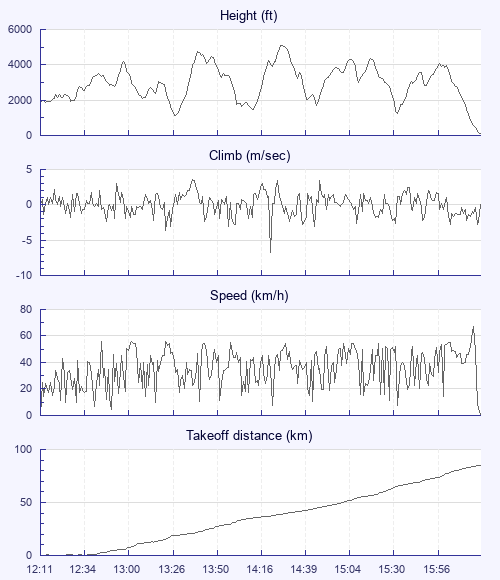 Well the Dales turned out to be the place to be. In attendance were Jake Herbert, Pete Logan and Gary Stenhouse, add to that Ali Guthrie and I was in pretty good company.

Wether Fell looked okay but no one was getting very high, a bit of time needed for the sun to come round? The rasp forecast was pretty good, the wind was a little stronger than forecast but okay. Although the sky never looked brilliant and there were a few blue thermals about, once away from the hill, it got a bit better.

My ambitious plan was to try and head north of Teeside airspace as the wind was moving more south all day.

A tricky start in weak thermals, way behind the gaggle, I eventually caught up with them as they were heading back from a blue sinky glide. Ali waited for me on his new Mantra and he joined me as I was in a rough climb, I radioed to say it was good but a bit snotty, just as he got a collapse and small cravatte below me. This was dealt with and he appeared above me in a blink of an eye. We only flew together in only one thermal before he was off exploring a wispy cloud. This turned out to be a blue sink hole from paragliding hell pulling him earthward at a rate! How he climbed back up from there I will never know, brill low save. I thought he was down.

Feeling guilty as hell, I was torn, but decided to head off for glory as I knew it's what he would have wanted? Plus I never get to whoop his ass and this was my chance!

(Turned out he not only recovered but caught Jake up and landed at saltburn, cracking flight, on, what was a test flight of his new wing, 86.7km. Jake was flying a Mentor 2, great flying. )

The others went south of Teeside, heading east as the clouds looked better. I kept to my plan to fly home. I got a canny climb over Richmond to about 5000ft which allowed me to start the transition north. I had to ignore good climbs as they would have taken me into airspace and I got a fair amount of sink but I made it around the north western corner okay. Quite tense and not the time for my first mid air pee, so I held it in.

I fished about for a bit in a blue sky and found a canny climb from a farmer turning some hay, (the second farmer generated thermal of the day)

I headed toward NW Darlington feeling great, but bad for Ali, (little did I know? ), but I could see the coast and the thermals were fairly frequent now that I started to miss the odd one in order to be faster, big mistake!

I nearly bombed at Sedgefield, even looking for a landing field (and a loo), but unwilling to give up just yet, put myself inn the right place, took a rough climb which was small but smoothed out and grew as I got higher.

The coast looked possible now but I wanted to try and get to my old fire station at Seaham. Standing in the way was Shotton Airport, more airspace! I decided that if I went west of it, I would thermal into it, so I went east, which killed the flight a bit as I was gliding from here.

Note to self: I should have made this decision a bit earlier and headed west to extend the flight.

I flew over the fire station tower, landing in a sports field near Seaham Hall hotel.

I got the call that Ali and Jake landed at Saltburn, Gary landed near Great Ayton, Pete got to Model Ridge. All cracking flights.

Having stashed my car at Scotch Corner, no hitches required, (thanks dad), just a run down to Stockton to pick up Ali and Jake.

It's great travelling back when everyone's had a cracking day, our flights were way different, heading in totally different directions but all made the coast and seperated by only a mile distance wise.

Jake and Ali are great blokes and I was glad to find they found it hard work too. I found the day tricky, varied and interesting, although the last 30k or so wasn't too bad, the conditions turned out to be better than they looked.

Hopefully we can get more days like this, but next time I want to be in the gaggle.

Wether Fell to Seaham 84.8km, a pb for me and an amazing day, over 4 hours flying, I feel so privelidged. I've only been qualified for 2 years, 10 months.