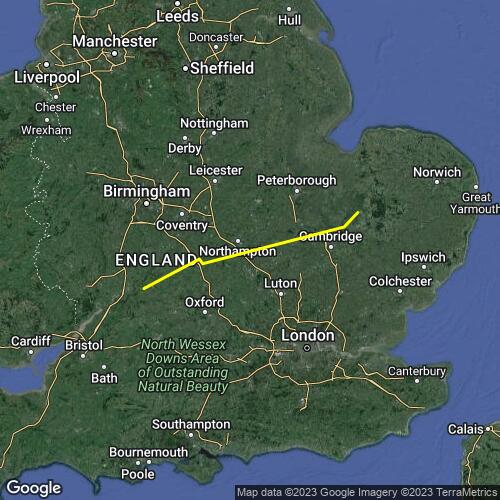 On the train making my way home after nearly six hours in the air… Tired and sunburnt having forgotten the cream again.

It started on Tuesday when Rich said Saturday looks record breaking, every one else thought it might be too windy, the day started ok with wind but not too much, not sure where to go in this Westerly, Frocester Rybury or winching, Rich called early and was aleady en-route to Edgehill and in a traffic jam, Wayne said Frocester was under loads of cloud so it was off to the winch field.

Away third tow with Mark already on his way down wind, slow climb out and Wayne marked the early lift, soon I'm alone as Wayne heads off impatiently, I dont have enough height yet and have to slow down to get to base which is about 4.8k at midday, the drift is quite strong, westerly between 15 and 24 km, before long Moreton in Marsh arrives with a detour to change cloud streets then Edgehill comes and goes, no sign of Rich, he has long gone by then, then over the gliding field and past the village of Ratley where I grew up, getting a bit low but not minding, as the views of my childhood pass beneath, the day is really looking epic now with base rising to 6+k and cloud streets stretch to the end of the world, sailplanes filling the air like confetti, in one cloud I get mobbed by about 8 of them, then they disappear like magic leaving me alone and relieved.

Airbox shouts warnings of 5.5k airspace to the north of me, I cross the M40 and glide on to pass north of Silverstone. I keep looking for Wayne and Mark but as I am usually the slowest I expect to get left behind. Gray should have caught me by now, pressing on its time for lunch with a quick Muesli bar and energy drink hastily forced down at the top of a thermal, trying not to drop anything on the unsuspecting motorists below.

Base is now even higher with full bar exhileration through the wispies - flying doesnt get better than this, get to the end of the street and look for the next one, passing over a drag strip below, two monster motors are fighting it out, then another twisty race track and i can hear the screeching tyres, Grafham water appears in the distance in shade with a windy surface, more sail planes are stacked up all the way down to the ground, I am mid-division and some of them are getting very intimate, the world and his glider are in the air today, still they have marked the lift and tempted me to over ambitious glides, in return they get to look at the funny man in a canoe at cloudbase, its perfect symbiosis.

Airspace blocks my way, and I fight the map in the breeze to try to work out which way to go, north or south by Newmarket, catch another cloud and head north, wrong move and i have to work too hard to avoid airspace, the canals and irigation drainage ditches of the fens are amazing from height, last glide out the now as it six pm, the altimeter reads below sea level when i land.