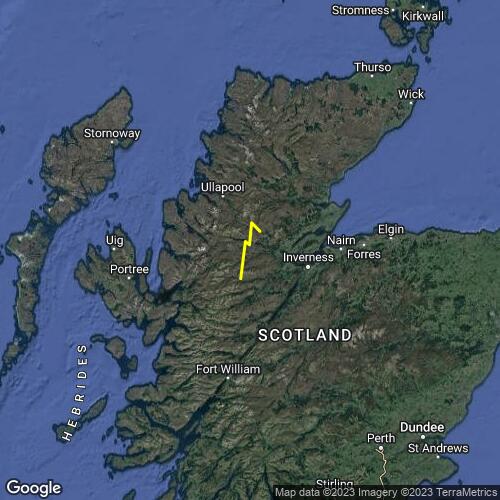 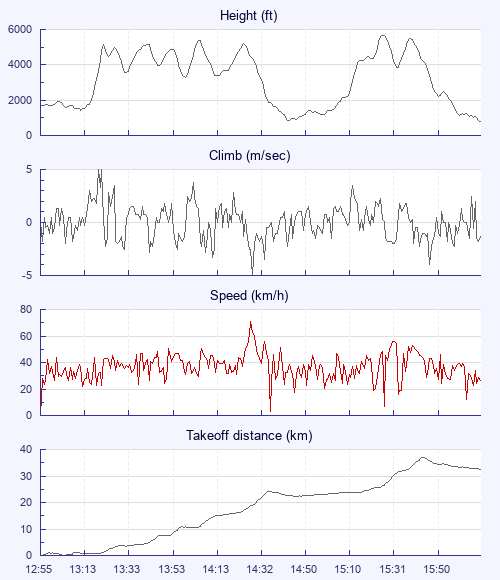 Had a belter of a flight yesterday.

Kev and I headed up Strathfarrar and walked up Beinn na Muice. It's a massive slab of rock which faces south and usually works well if there is sun on it. However, the launches are very small, technical and committing - it's not for the faint hearted! When we reached launch it was working but - just as we finished setting up - a massive bank of cloud obscured the sun and shut the therms down. We were hot in our gear and the midges were biting - we decided to give it a go. We soared the face for about 20 minutes, ekeing out every tiny bit of lift we could, but it was 5m up / 6m down and before long we were on the deck.

The midges in the valley floor were hell. We packed up very quickly and shot off up the hill again. I could see that the day was improving and just about gave myself a hernia getting back to launch. Put my dry clothes back on, paused to properly do my checks as I knew I was hurried - launched.

It was now a very different day - strong but small therms ripping up the face with big sink between them. It made for a roller coaster ride along the face of Beinn a Muice. I managed to find one that felt big enough to turn in and figure eighted my way up until I could make full turns. Once above the hill the therm consolidated into a ripper straight to base. I dropped back to the main ridge of the Strathfarrar Munros, which were looking stunning in the sunshine. I was in two minds - run the ridge or commit north over the back into Glen Orrin. It's a fair commitment as you need at least one more climb over the back to get you into Strathconon and to a road - otherwise its a long walk. There was lots of sunshine with blobs of shade showing a nice disbursement of clouds. I went for it.

Two nice climbs later I was in Strathconon and Glen Meinich, where I have watched golden eagles so many times. I knew I needed a good climb here to then make the long transition to Achanalt. I found a ratty climb off Meallan an Uan, which then consolidated with a therm off Sgurr a Mhuillin and took me to base at about 5200 ft.

Its then an 8km glide to the north side of Strathbran and I arrived just at the top of a very low and shallow hill. I knew I needed some luck and was thinking more about how to get close to a road than how to continue the flight. The hill was so shallow it matched my glide angle as I pushed south. I slid down the side of it - gliding over a km not more than 15 feet off the ground. Just as the hill approached the road it steepened enough that I had about 100 ft below me. I set up to land beside the road and made my approach but hit a bump so had to go around again to realign with the landing. Then hit the bump again. This time I turned more carefully and found that I had gone up a meter. After working that bubble for 25 minutes it finally consolidated over a tiny outcrop no bigger than a house and took me to base - a very happy man!

I then decided to commit again - over Loch Fannich and past the Fannich hills, which I had never seen up close before - so beautiful! I emerged at Loch Glascarnoch, with its water levels historically low and the old road clearly showing at its west end. I flew over the loch to the hills to the north and had a think and a look at the map. To continue further north was a massive commitment into Strathvaich Forest - a vast area of trackless mountain terrain. It was nearly 4pm, I needed a pee and was cold. I remember Neil saying that his Dad and the good old boys use to hold comps at Glascarnoch and enjoy drinks afterwards at the Aultguish Inn - that sounded enticing!

As I flew east along the north side of the loch I clearly saw a thermal entraining across the loch and up the hill just to the north of the Inn. It must have been huge as there was a large and perfect cumulus forming off the top of the hill and as I flew through it the breeze ripping up the hill was quite stiff. However, by now the slope I was scratching was very shallow and mentally I was already in the pub. I half heartedly took a couple of turns in lift and then landed in the field beside the Inn.

I went in for a pint, which became two pints. Before very long Becky arrived with the kids and we all had a cracking pub-grub supper.

As we got into the car at 6.30pm I looked at Ben Wyvis and saw that it was still working nicely - with base super high above it - a fine sight indeed.