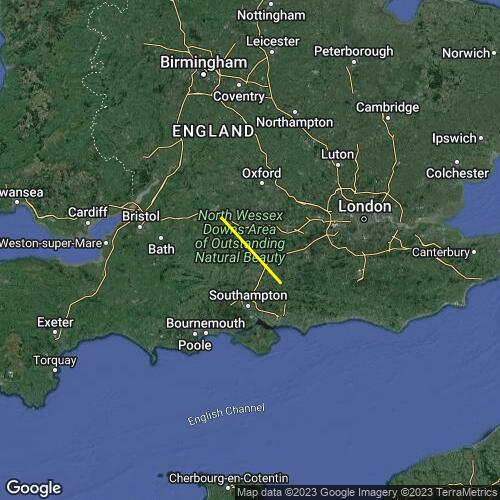 I rode my scooter to Liddington with hopes of a perfect day, despite the slight fading of RASP's ecstatic forecast over the preceding 24 hours. Mike "Helium Pants" Long was soon boating about quite high, but it got rather difficult as more took to the air and the clouds spread out.

Eventually a mini-gaggle climbed out; two got away, but Jim Mallinson and Paul Jiggins had to come back for another go. Top cover loomed, and I began to resign myself to a damp squib of a day.

Then, for reasons that cleverer people than me might understand, it suddenly became buoyant, despite the lack of sun. I got into a climb with Mark Rubinstein on his Gin Explorer, with Gus Charnell above us. A blue Phi joined us for a second climb, but when it began to seem that we were thermalling downwards, I set off southwards after Gus. I'd forgotten that he was planning a triangle, and in any case he didn't seem to be finding much, so I steered more downwind towards Ramsbury.

An envious glance backwards showed Mark and the Phi climbing again, but I'd made my bed, and I almost found myself lying in it. However, across the Kennet valley a farm stood on high ground with plenty of tin roofs and concrete, plus a large lorry setting off out of it. It worked perfectly, and I got up again from about 1100 feet.

Near Hungerford I was joined by a red and blue M7, its pilot sporting an aerodynamic helmet. He showed me the core a couple of times, and after a glide we met up again. Meanwhile I'd seen a single orange glider soaring Combe Gibbet low, but no one else there - it may have been Paul J.

Lift was plentiful until I approached Micheldever station and the A303, where I thought I was about to land just inside (legally) Popham airfield's circle, without inconveniencing them, I hoped. But instead a fierce climb took me straight up to 4,800, as I wrestled to keep the wing under control while looking out for aircraft coming in or out.

By now I was approaching the new 4,500 foot zone for the first time. I checked on my Oudie and pulled out my crumpled paper map; yes, that line was definitely the start of it. I was a bit unnerved by the speed of my last climb, so didn't position myself over the climbing M7 when I caught up with it again. I had visions of cruising through the zone at 3,000 feet, taking the occasion one metre per second climb, but it wasn't that kind of a day. After rejecting a couple of thermals, I approached the village of North Street and found it full of power lines of all shapes, sizes and directions. Luckily I had enough height to reach a big field beyond it, full of crop but with a road-width strip cut through its middle, which I used as my runway.

Charles Haviland had landed quite close but was already on his way north in a taxi. I packed up as the M7 flew over my head and a hare scampered into the crop. I enthusiastically began the six-mile walk to Alton station, but common sense and my artificial hip persuaded me to ring for a taxi once I'd reached Kitwood. Four Marks Taxi was busy and passed me on to a colleague.

At the station I missed the Reading train by 30 seconds. Seeing this, the ticket clerk kindly came out of his office to give me a print-out of an alternative route, and detailed instructions: get out at Farnham, stay on the same platform, off again at Ash and change platforms for the Guildford to Reading service. I had time for chips from a kebab van outside the station first. On the train, the seat opposite mine had a playing card on it - a joker. What did it mean? I'll never know.

I considered going straight home to Pewsey and riding my folding bike the next day with a backpack to put it in when I collected my scooter, but I missed the Pewsey train by 30 seconds, and in any case felt a bit uneasy about leaving my Honda at Liddington overnight. So Swindon it was; there I had a sandwich and drink while I waited for Jim to arrive after his 100k flight and share a taxi. In 35 minutes, I saw only one of the dozen waiting taxis get a fare. Tough times.