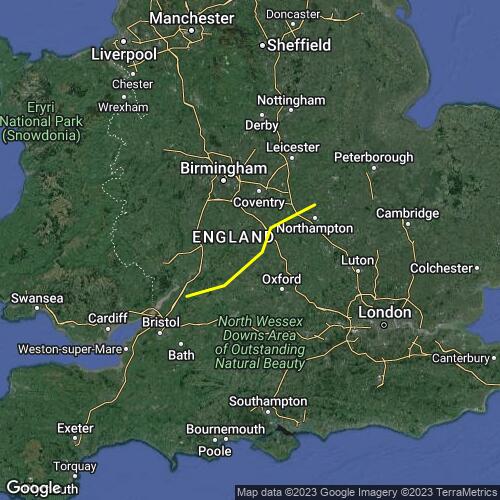 Given the forecast Fabio, Wilian and I arrived at sunny Frocester about 10am, all smiles. This was not to last. The forecast was for WSW 6 to 8mph steadily increasing throughout the day. Cloud cover was also likely to be a problem as the day developed, so the intention was to get going whilst the going was good. However. As we stood by the cars rocking & rolling in the car park, we knew the wind might possibly be a tad strong.

I was surprised only Tom, Lawrence and Alex were on the hill, setting up. It was indeed gusty! They assured us conditions had been quite calm until fairly recently and they fully expected the wind to ease, but experience of Frocester had taught me to be cautious. Still hopeful of getting in the air we set a task - Huntingdon.

Alex and Tom were off early in the spicey conditions and well on their way by the time the rest of us took to the air. Though bumpy there was little in the way of organised lift and it took some time before Fabio and I squeaked away in 1.5mps climb. The trick was getting to base and Fabio struggled for a few km or so before finding something worthy of the task just behind Selsley. We pushed on over the Cotswolds almost, but not quite enjoying the lovely views. Instead we whooped and waved each time we were close in thermals before one of us would rush off.

But this time the fun last. Staying high was proving more and more difficult as the flight went on, the overcast sky overtook us and at 50km in to the flight Fabio lost a low scuffle with an embryonic thermal, and landed.

This was a shame as the sky sort of opened up afterwards with some regular spaced clouds and reasonable climbs. I bumped into, well, crossed paths with two other Omegas, a 2 and a 3 I think, but it wasn't long before I too was struggling to stay high.

An open field kind of playground thingy was the perfect place to set down for the end of what was a bumpy, but enjoyable flight.