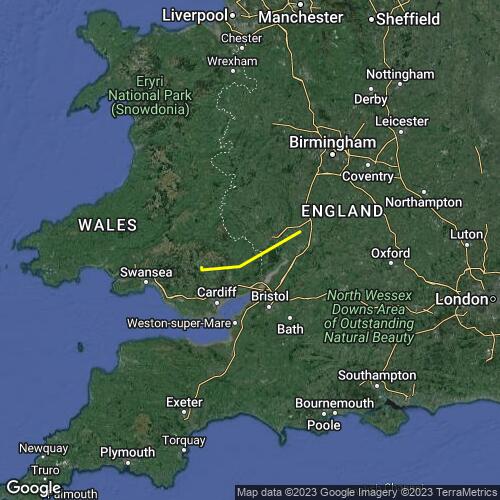 I had just enjoyed three days of mountain biking in N Wales and got back home on Sunday evening tired, with a car full of dirty clothes and bike stuff. I flopped in front of the computer with food, and had no energy to check the weather. Rob Kingston called me and said 'get ready, its on for Merthyr tomorrow! '. I packed my stuff ready and he picked me up the next morning.

We picked up Peggy Williams and Ollie Clothier and arrived to reports of strong winds, but its often like that on Merthyr when its perfectly flyable. I had a new harness (Delight 2) and a new glider (Chili 4) and was unfamiliar with both so waited for a lull and luckily I got off easily. My goodness it was cold, and I spent ages plugging in my electric gloves, which proved essential. In all that faffing I hadnt seen that loads had gone south over Aberfan, and were slowly climbing out. Some were starting their XCs and I thought I might have missed it. Soon I was in a steady but slow climb, and met 3 other pilots, The base was about 4200ft, but it was hard to find a really decent climb. I usually make my own way on XCs (not really a gaggle flyer) and soon I was getting low in the lee of the hills, near Pontypool. Ollie on his Zeno, had been low but now was showing me a reasonable climb to base. The lee of the S Wales hills are a classic place to bomb at 20k and I was glad to head upwind to join him.

After that it got really easy, with little puffs of cloud, all of which worked. Ollie lead me out but I took to flying through his lift and finding some further on. (I love leading out Zenos on B gliders, tee hee! ) Little puffs mapped out the route, and we crossed Raglan, following the road to Monmouth, swapping the lead, taking different lines, but always ready to help each other out. The air was remarkably crisp and cold, and was some of the best and most bouyant I have ever flown in. I then decided I needed a wee. Normally I put on a pee tube but didnt bother this time, a bad mistake. Near Monmouth I had to lean forward, and most finished on my harness and trousers… I relaxed again, and Ollie and I climbed together over Ross.

It was easy to stay up, but difficult to get up high, and we were milking everything. Ollie went for a glide further north, I did the same but on a line to Tewkesbury, as Ollie's line seemed to not be working. The Severn flatlands were getting wetter and I tried to eke out any lift but the now milky sky had killed the small chances of getting across this well known sinkhole. I landed, glad that the increasing wind was not too strong, and realised that with the Covid crisis looming, hitching was not going to work. Luckily Ian Smallwood was around and gave me a lift to the station, where the radio told me that this was likely to be my last XC for a while… Great day out tho!