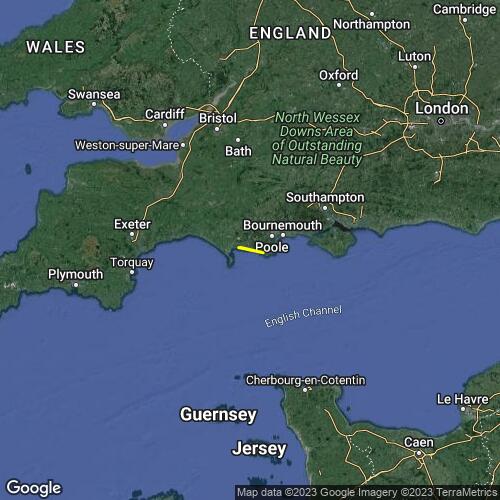 The first time I have had the opportunity to fly east of Lulworth and what a great trip it was. The wind was very much to the south, maybe even a bit to the east, and I couldn't believe how badly I was being drilled as I flew out to the cliffs. In fact at one stage I didn't think I would make the cliffs and was probably only ten feet above the heads of the walkers at the cliff edge. A few of us pressed on towards White Nothe with no lift at all, getting quite low, but knowing that it would be an elevator ride up the cliffs once we got there. From there it was easy going over Durdle Door, out over Lulworth Cove, over Warbarrow Bay and a push forward on to the magnificent Gad Cliff, all in the company of Wez and James and a few others. I made an exploratory trip along the inland ridge towards Kimmeridge, but came back thinking it wasn't going to work, but Wez wasn't having any of it and headed out. I got some more height and followed him. By the time I got to Kimmeridge it was an in to wind glide, about 50ft above the sheep who were grazing the lower slopes, but I just managed to squeak around the corner to finally get some lift and then on to Swyre Head. I was tempted to push on towards Swanage, but decided it was time to head back to Ringstead, which was achieved pretty comfortably. What a great place to fly.