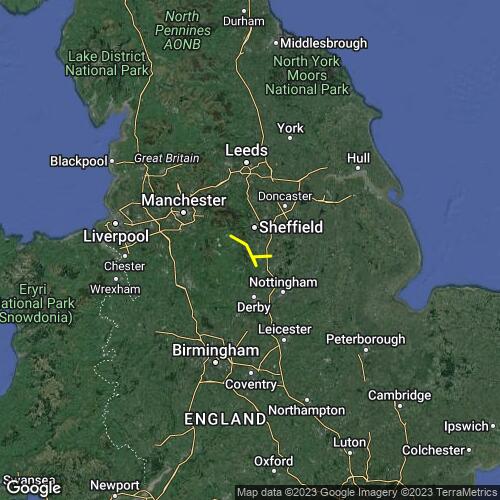 Spent ages trying to climb out, nearly every xc pilot had got up and gone, then finally got a climb with Buzz. Climb weakened over the moor at the back and I was in two minds whether to go for the fire on the moor, Buzz wasn't so dithery and went straight for it, went up like stink, I followed. Stayed in the stinky smoke thermal for ages, which gave the line of convergence time to move east and let more sun on the ground. Headed over to the sunny edge of the huge cloud motorway, bimbled about underneath it with Buzz fotlr a while, trying to work out how best to use it.

The cloud motorway was heading straight towards e mids airspace. Rasp had showed it having a spur that would get through the airspace gap then SE towards Peterborough but i was late, and couldn't see any sign of any other active sky so i tootled along under the big grey stuff for a while, not going to base as it wasn't really necessary and i was wary about getting sucked in.

Lost Buzz near Chatsworth, he'd been higher than me for ages then flew to the sunny edge, spiraled loads of height off, mooched about for a bit thermalling again then I lost sight of him. (Tirns out he'd lost sight of me and had come down to look to see where I was! ) Decided just to head towards increasingly lower airspace and wing it when i got towards the FL40 bit, hoping there might be some clouds forming by the time i got there, but was making very slow progress and wondered about flying back to takeoff along the convergence instead. Realised shortly after this point that my recently acquired Garmin was set to miles instead of kph, explaining why it seemed so slow(it was only showing 30odd downwind! ). New season blunders: -)

Turned round and flew back to the FL75 air so i could go higher and not think about it, with one idea of flying back but an option of heading downwind if the clouds started forming further east. As i was heading north i could see another long line of cloud going the direction i wanted, and decided that with not much day to play with I'd dash off downwind… Earlier when I'd gone across the convergence line both sides had been working well, but this time i just sank out, realised exactly how big the blue hole between my cloud and the next was, thought i might just make it. As i flew across, the promising cloud fizzled and I picked a sunny field to land and defrost in.

In hindsight I should have just carried on along the sunny side of the convergence line and believed a bit harder, I think it may have been possible to get most of the way back. But I'd convinced myself the cloud street was going to move too far east for me to get back, forecast was for increasing westerly wind… Gave up too easily. Lesson learnt: -)

Sorry for borrowing your crown temporarily, Viv, am sure you'll claim it back soon: -)