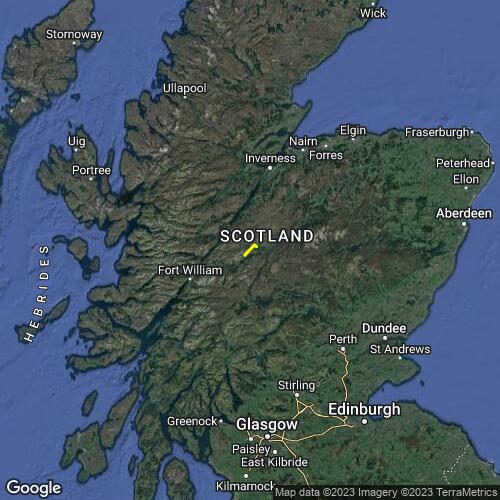 On my way to the far north-west of Scotland, I'd stopped at the Glencoe ski area, tempted by an excellent RASP forecast. In the end, I had a top-to-bottom from near the summit of Meall a'Bhuiridh, with scarcely a bubble of lift. And, with a less good forecast the next day, I'd kept travelling - only to hear that the second day had in fact turned out to be good. Annoying - so I was keen, on my way back south, to grab a last cross-country chance. I left the Free Kirk campsite at Portmahomack at the crack of dawn.

Daan and Jay were heading for Na Cnapanan, on the flank of Creag Meagaidh. Warwick decided to abandon his Dalnaspidal plan and join them, so I did the same, after breakfast in Aviemore.

We marched sweatily up the track, to find it a bit breezy on the planned launch, and a bit off to the west. Warwick had the sensible idea of walking down to a lower spur, at just over 600m, which faced the right way. He was off first on his Maestro, soaring easily and then finding a good climb. I joined in under him on my Yeti, but lost it and flew back out front of launch, where Daan had found a climb on his Pi. Pimping off him from above, I gained plenty of height - enough to see a patch of rain coming over the shoulder of the big mountain from the west. As Jay, still near launch on his own Pi, decided to head down to land at the car park, the rest of us really had to turn an go.

I was at the rear, midway in height between Warwick and Daan. The latter went low off the end of the ridge, which I didn't fancy. He was fine, but found nothing more and landed safely before the huge power lines. I scraped around in the bottom of Warwick's next climb; I couldn't catch him, but got enough height to get over the cable. Warwick joined a buzzard as I thermalled scrappily up a tree-covered brae. Seeing the wilderness of the Monadh Liath downwind of me, I determined to stay near the rough road below in what turned out to be the upper reaches of the Spey.

By now my only ambition was to take the flight over 10k so that I could put it into the XC League. My Syride displayed only distance from launch; I guessed that 9.6k should be plenty, with a few twists and turns (it turned out, indeed, to be 11.7). I landed safely in soft grass and heather, and packed up by the road.

A few work vans and lorries went past either way; I'd brought my GLIDER PILOT NEEDS LIFT SIGN in case of dire need, but didn't try it out. I had just enough intermittent signal on my phone to send a Telegram location. I also had my Garmin Inreach Mini, but didn't really know how to use it to tell anyone where I was, except for my brothers or the emergency services, neither of which would help much. I must get it set up properly before my next trip to Scotland.

I worked out that walking back to my van would be a long, hard journey. Fortunately Jay was on a rescue mission, and turned up not much later with Warwick on board - he'd done only a few more km. After a confused phone call, we found Daan using eyeballs rather than Inreaches.

A lovely small adventure to end my autumn trip - September in the Highlands is very different from my normal St Andre excursion, but no less enjoyable.