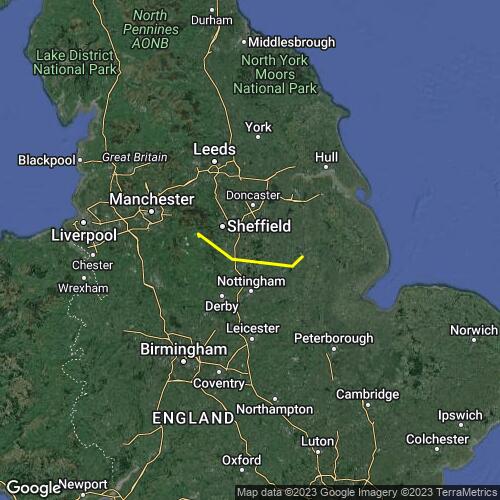 On the drive from Preston to the Peak district, I was in wall to wall fog until 8 miles from the hill - it's fair to say I was not optimistic! Happily, a nice blue sky greeted me as I arrived first at take off, but no wind. During the wait for wind, several other pilots arrived.

Clouds started forming and the wind arrived, and I was first off (apart from the trainee pilots doing top to bottoms). I minced around for a bit getting used to the site, and watching the sky on my planned triangle route. Eventually Helen Gant climbed out (I should have followed but was low and at risk of going outside my top landing window if there was no climb). Soon after, Ash Ghinn, Chris Ashman and I climbed out with some sailplanes, from the same place that Helen did. I introduced myself to Chris and Ash, and we set off.

The hill appeared to switch off, and it was blue above us and in the hope valley, whereas downwind there was an obvious convergence line. I therefore decided to ditch the triangle and go for distance - as it turned out, a good decision despite the winds being very light all day, making progress slow.

Ash and I preserved altitude in the blue, whereas Chris surged ahead and connected with the convergence. Ash and I followed and enjoyed a lovely line surfing alongside the clouds. We also saw Helen, on her way back to Bradwell.

I took a less optimal line than Ash and got fairly low, but Chris helpfully marked a thermal ahead for me which brought me to the same height as Ash when he joined me in the climb. Chris had once again gone ahead, but Ash and I caught up over Mansfield by straight lining under a cloudstreet while Chris was in a low save.

When we got to the A1, the three of us finally reunited after 3 hours of being separated! It was obvious that the day was fizzling out, with the climbs getting ever more gentle. Not surprising with the shorter day this late in the year. We spent a lot of time turning and not really drifting very far. Eventually, we all went on a glide to Lincoln and landed in the same field.

A fantastic late year flight and great to get my second best flight (my 112km flight from Parlick was during the league closure period). The Rook 3 goes really well!

It's been a great second year of flying with good progression for me, the league position is an anomally due to COVID but I'm happy to beat my score from last year, especially since some high scoring flights were not being included because the league was closed. Fingers crossed for a fun year next year.