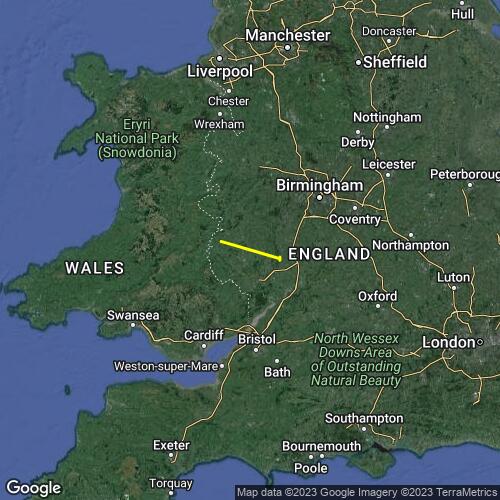 After a night at the beautiful Fishponds campsite, where Lucho Zuidema and Ashley Barnes also stayed, it was back to Kettle Sings for an even earlier walk up the hill and an even windier start to the day.

Rupert Firkins soon demonstrated that it was flyable, although it was a while before anyone joined him. I prepared my kit behind the top of the hill again, and waited carefully for a lull before launching - this time in a controlled manner.

The air felt nicer than the previous day's. Clouds showed where lift was likely, and the extra wind removed the risk of bombing out. A gaggle was soon away; I got a climb to 2,500 feet, but chickened out of trying to join a wing climbing a few hundred metres downwind, fearing that I'd drop out of the bottom of his thermal. David Williams then got high and headed south; I regretted not following him until a small but really strong climb appeared, with Garry Holtby in it on his new Alpina, and Stephen Gray on his Windtech Honey - you don't see a lot of those about!

Cloudbase was about 3,700 feet - the same as Thursday. It's unusual enough for me to fly 50k twice in two days, but doing it without reaching 4,000 is rare indeed. I set off a bit short of base, while a couple of others in the gaggle had to big-ear to stay out of the cloud.

It was cold again, but I had a heat pack in my right lobster-claw mitten, and stuck my index finger in the left one into the pouch with the rest of my fingers, which made flying bearable, if a bit clumsy.

Stephen on the Honey got a superb low save ahead of me, but I'd already turned back to a climb that Garry was marking. I couldn't get up to him, but climbed enough to head onwards under good clouds.

I saw someone land on the edge of a low valley, with another climbing on the other side of it near Canon Pyon. I flew straight down the middle of it; I can't remember now what my reasoning was - perhaps my brain was freezing - but not surprisingly I got low. I was picking out landing fields when a hint of lift became steadier and steadier. As Rupert landed at Weobley (by choice - he was ing, too), I got back up to 3,500. Garry was now ahead of me and a bit south, probably out of reach. I decided to head directly downwind towards Kington again, but glided steadily to the ground a couple of kilometres short, with the Oudie registering 50k just as I turned into wind.

I was in the village of Lyonshall, where a nice lady was waiting at a bus stop; she was going to Kington, but told me that the Hereford bus would be along in ten minutes. The driver warned me that he'd be stopping for 20 minutes in Weobley to pick up schoolchildren, but the bus still seemed my best bet. Rupert climbed aboard in Weobley, and we defended the front seat of the top deck against hordes of teenagers. A little further on Darren Barter joined us after a late XC, which was a godsend, ot just because he's good company but because he had a friend picking him up in a van at Hereford station. Peggy joined us there, and we were soon having tea and Hob-Nobs in my own van back at the hill.

The day had much more potential than Thursday - Tim Pentreath and Tom Cole did big flights to the coast - but I was very happy with my third 50k of the spring. Fourteenth place in the XC League won't last long, though!