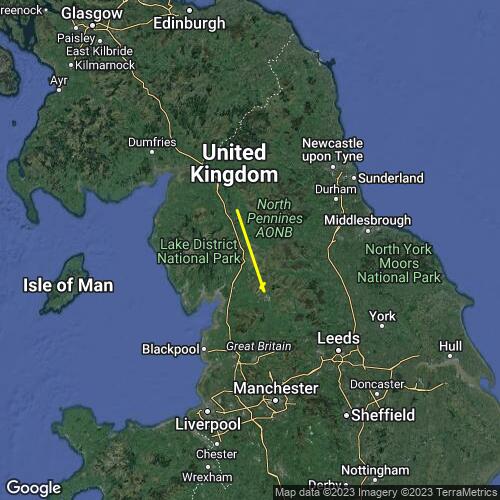 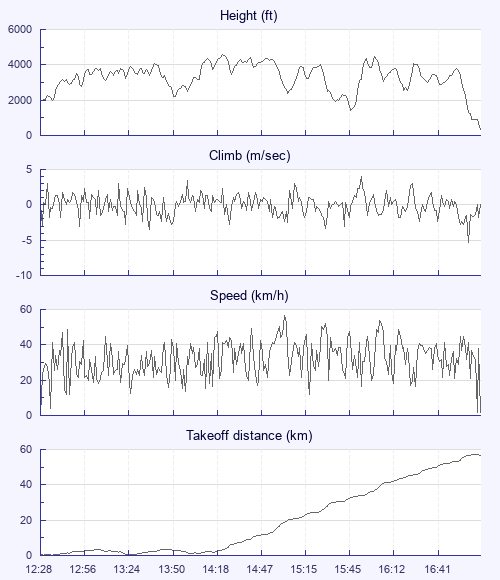 Thanks Jim Ashley for the choice of site, I thought the wind was was too far South. Driving through Ingleton we nearly turned back under the uniform grey blanket, but we put our faith in the weather forecast which turned out to be spot on. A triangle around the 3 peaks was set, but after an hour of vainly pushing upwind, Ingleborough wasn't getting any closer, the thermals were rough and spring like and the southerly wind was making life near the hill very unpleasant. Poor Jim, after persuading Graham and I to join him, landed early and had to console himself with a pint and a nice view of Ribblehead viaduct.

Graham and I decided we'd go over the back, and found that the clouds were behaving just like the textbooks say they should. With hindsight we could probably have pushed faster but lacked the confidence to leave the climbs early. Arriving at the M6 we debated pushing on towards the Lakes, but the clouds drew us along the motorway instead. Both of us had low saves at Tebay, and I was privileged to share a 2000' climb with a true king of the sky - a buzzard that stayed just in front of my leading edge all the way to base.

Landing at Langwathby I set up for an empty field but got it wrong and had to stall it into the field downwind as I wouldn't clear the fence. Then bundle up my glider and run for the gate as a herd of frisky cows galloped towards me. I swear one of them was trying to head me off, but I made the gate, throwing myself, still in the harness, and the glider over it in an ungainly heap. Note to self: must stop crashing on landing.

Big thanks to Jim Ashley for following us in Graham's car and a speedy pickup.