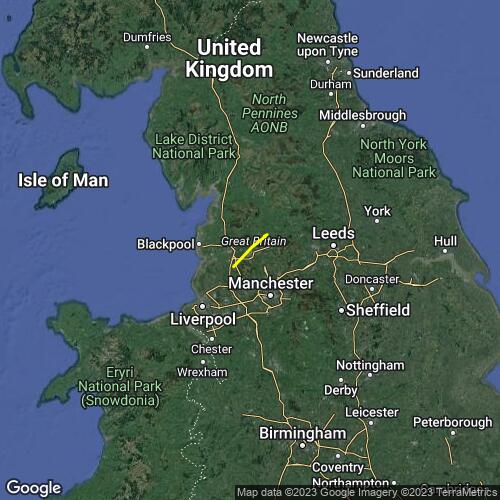 Sometimes the unexpected days are the best. The usual suspects were off to the Lakes to escape the forecast strong winds round our way. I included myself out as my future survival depended on being home for 6. So when some forecasts suggested winds might be flyable locally later, off I went to the local secret take off that everyone knows about. And for once the winds were exactly as predicted - the early strong gusts mellowing out, but it wasn't until 12-ish that Cu began to appear and I enjoyed a great climb-out to base with John and Nick in a pretty rough-edged spring thermal. Once up, and practising turning half in and half out of lift to keep clear I realised I was still close to the hill, that there was very little drift.

Hmmm, my ambitious declaration of Southport, 55km away, wasn't going to happen. What to do. Some nice clouds downwind beckoned, and John & Nick had returned to the hill, so that was me alone facing a clear blue sky all the way to the coast. Mincing around in zeroes for ever, I think I finally learned to be patient and wait for something to happen. Nothing dramatic but slowly I drifted a bit further away. I nearly gave up after about 15 km as there were no more clouds and thought about turning back to launch then spotted an orange Gradient low below. Thinking 'maybe he's got a cunning plan for getting back to the cars' I headed over to land near him. Then he started climbing! Yee Haaa, thank yo Scott! Back in the game and back to base with my new partner, but this time in blue thermals only to go our separate ways. Drifting over Brinscall I called a mate who lives there. "I'm flying over your house". "Great, he said", "If I was at home I'd give you a lift". Over Chorley approaching 4 PM, I looked at the time - late but I could see the coast, could I still make it? Searching for lift but desperately relieved not to find any, I landed and called up a non-flying friend to beg and cajole a lift back to my car. What an absolute star!

Did I get home in time? Well the rail companies don't count 5 minutes as late, so yes I did. Nearly 2 and a half hours to get 30 and a bit km - is there a slow paragliding award?